The show will feature a person who has been given a terminal diagnosis with a finite amount of time to live. 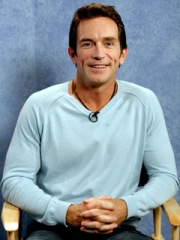 Jeff Probst, the host of long time Reality hit, Survivor, has created and will host a show called “Live Like You’re Dying” according to news from EW.com. The show will feature a person who has been given a terminal diagnosis with a finite amount of time to live. That’s when Jeff steps in to “take them on the last adventure of their life.”

It could be anything from reunions with lost friends or formerly feuding family members, a “legacy moment” that will ensure their name carries on forever, and living out a personal dream. “It could be playing guitar with Eric Clapton or jumping out of a plane into a volcano,” Probst explained to EW.com. “Whatever it is that you’re still desiring to do in your life — we want to make it happen.”

Some people think the idea is a bit morbid. Personally, I think its awesome that he’s got the guts to do a show about death right after doing a show called “Survivor” for so many years.

Production on the Live Like You’re Dying pilot will begin in January (after filming has wrapped on season 18 of Survivor), and no airdate has been set should the show make it to series.

I have a feeling this could either be touching or could go really, really badly. Sure, some people will want to find their lost children, or climb mount Everest… but there’s always gonna be one guy who wants to go out in haze of hookers and blow…