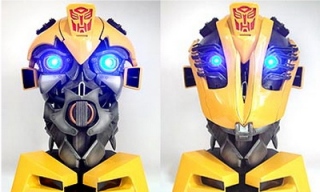 Holy Crap! This is not the bust I was expecting. Don’t get me wrong, I was a big fan of the other busts that have come out of PopBox over in Hong Kong. Their work on the Irobot busts was amazing. Sonny was more like a prop replica than a mini-bust. He was made of the same materials that he was supposed to have been made of in the film. Pieces came off so you could look inside his head, and his brain lit up with a light sensor. The Electronic Bumblebee bust has all that great craftsmanship, plus an additional year of technology behind it. Plus, the thing is damned near a foot tall.

Starting with the packaging, you feel like you are getting something special. So, right from the start, you know that any Transformers movie fan you buy this for will be peeing themselves with joy. Once you get it open, the actual bust does not dissapoint. This is not your old school Resin Bust. It is made from a combination of ABS plastic and die-cast metal.

There’s over 40 pieces on the bust that give it a much more realistic look than you’d ever get from sculpting.

The paint is flawless and the the details are amazing. Once again, these should really be called prop replicas and not busts.

The photos will pretty much show you how cool the thing is, but I want to tell you about what it does. First off, it transforms… kinda. you can remove parts of hits head so that you an add on his face shield for attack mode. I prefer the standard mode, but either way looks pretty great. Then you’ve got the antennae which you can pivot up or down. the eyes light up with brilliant blue LEDs and will activate depending on how much light is shining on the bust.

Then we’ve got the Voice Recorder. This is a different type of thing than I’ve seen on busts. I’ve seen voice chips, but never have I seen robot sounding voice recorders that let you record your own quotes and clips. This makes sense because, in the movie, the Transformers absorbed the language and culture from around them.

There’s really nothing more I can say about this piece. If you are a Transformers fan, or if you love one enough to spend the money, this bust is a no brainer.

Check out the Gallery and then pick one up at:
PopboxCollectibles
Sideshow Collectibles
Action-HQ