When you’re on top of your game, you’re the King Of The World. You don’t play by the rules. You make them. But what happens when the very nature of the game changes? 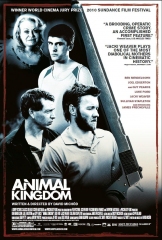 I like the movies that razzle me and dazzle me, kind of like that song from “Chicago.” I like the glamour, the glitz and special effects. Therefore, I found it amazing that I not only liked “Animal Kingdom” but was drawn into the gritty world so completely and so quickly.

A Sony Pictures Classics / Porchlight Films Production film that won the Grand Jury Prize World Cinema in 2010 at the Sundance Film Festival. “Animal Kingdom” is written and directed by David Michod and produced by Liz Watts. It is a story about survival of the fittest in a world of crime and brutality.

Before going into the review (with spoilers), here’s a quick synopsis and background information:

Armed robber Pope Cody is in hiding, on the run from a gang of renegade detectives who want him dead. His business parter, Barry ‘Baz’ Brown wants out of the game, recognizing that their days of old-school banditry are all but over. Pope’s younger brother, the speed addicted and volatile Craig Cody is making a fortune in the illicit substances trade – the true cash cow of the modern criminal fraternity – while youngest Cody brother, Darren, naively navigates his way through this criminal world – the only world his family has ever known.

And into this world arrives their nephew, Joshua ‘J’ Cody.

When tensions between family and police reach a bloody peak, J finds himself at the center of a cold-blooded plot that turns the family upside down and which also threatens to ensnare innocent bystanders such as his girlfriend, Nicky.

J comes to realize that in order to survive he must determine how the game is played – he must somehow choose his place in this cunning and brutal animal kingdom. He must work out where he fits.

The movie starts off innocently enough with what looked like a normal teenage boy watching a TV show with his mom napping on the couch next to him. Within a few seconds, we find out that his mom isn’t sleeping. She’s dead from an overdose on heroin. He’s not what you would call a normal teenager unless “normal” is defined as having armed robbers and drug dealers as sociopathic family members who make it a point to associate with crooked cops and exact cold blooded revenge as needed.

Such is the world of J, someone who’s not exactly a boy but not a man yet either. 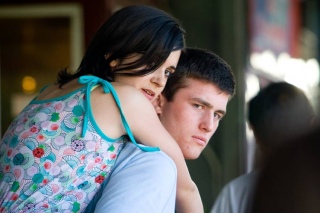 Survival Of The Fittest

When you’re on top of your game, you’re the King Of The World. You don’t play by the rules. You make them. But what happens when the very nature of the game changes? These are the questions that you’re dealt during the opening sequences when you’re introduced to the highly dysfunctionally functional Cody family and Pope.

The bread and butter of the Cody family and their business associate, Baz, used to be armed robbery. However, as technology improves and the cops get more crooked, this particular way of life proves to be no longer profitable. While Pope’s in hiding, members of the family find new niches and what works for them. Baz realizes he’s good at manipulating the stock market. Craig Cody is raking in the dough via the highly profitable but oh-so-illegal drug trade. Darren Cody, the youngest one until J comes on the scene, is the happy but clueless one.

J, the vortex of this story’s storm, is a Beta male. He’s young enough to blindly follow orders without questioning because he doesn’t know any better but he’s old enough to start wondering if doing what everyone tells him to do is a good idea.

But Pope? Pope’s what happens when you can’t adjust to change. He’s a throwback and i mean it in the worst possible way. Pope doesn’t know how to cope with change and it is this inability to adjust that makes him so lethally dangerous.

I thought the title of this movie was really clever in its obviousness.

There’s always an Alpha male and a Beta male in animal hierarchies.

At first glance, you’d think the initially elusive Pope would be the Alpha and J the timid Beta.

I’m not going to give away the secret to this movie (it’s not that hard to figure out if you pay attention) but I’ll give you a hint. Watch Grandma Cody. She may be an older lioness but her fangs are still sharp and she hasn’t lost her kill instinct. ….oh, who am I kidding? Warning, warning. Spoilers ahead.

In The Jungle, The Mighty Jungle 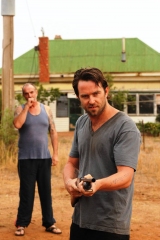 Being the Alpha is great and all because you get to make decisions and everyone has to follow them. The problem with being an Alpha is that you can be taken down because you can’t stay in that position forever. Sooner or later, there will be someone hungrier than you and more determined than you. That will be the day when the Beta will rise and the Alpha will fall.

At first, I didn’t think this concept played out well at all in this movie but as the movie unfolded, I realized that despite all his posturing and chest thumping, Pope was never the shot caller. It was Smurf.

Think about it. Smurf is the mother of all the Cody boys. She would do anything to protect her boys and I’m pretty sure she’s the one who introduced them to all things shady. She’s the one who’s silently guiding them towards their doom and when they’re caught in the web of senior cop Nathan Leckie’s justice, she’s the one pulling strings to make sure charges are dropped.

I think all the actors and actresses in this movie were great. Their performance pulled me in from the get go and I was a goner. A few deserve extra attention.

Pope (Ben Mendelsohn) is brilliant. Omfg, he was so creepy, vile and disgustingly slimy. He made my skin crawl as Pope. His portrayal of Pope immediately made me feel like I had to watch my back around this guy. He’s like the lowest member on the totem pole who immediately rolls over on his back and exposes his belly to the leader but he’s also the one who would stab the leader in the back the first chance he got. The first time I laid eyes on Pope, I felt my toes curl because I knew he is not to be trusted….and sure enough, he isn’t. 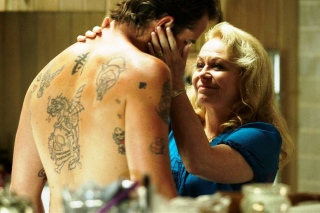 Joshua ‘J’ Cody (James Frecheville) is also excellent. He gave you the impression of the perfect child foot soldier who doesn’t think about why you’re asking to do something but will just simply carry out orders. He’s the perfect man child. In the beginning of the film, he gives off the impression that he’s just a lost high school boy. If you were to look inside his head, you’d see one of those carnival monkeys winding the Jack-In-The-Box toy thing. As the movie zips along at a cocaine powered pace, you can see the exact moment when J loses his milk teeth and is comfortable using his brand spanking new fangs. I’m Team J all the way. Oh yeah. One more thing. Don’t do drugs. That stuff’ll make you crazy. If you don’t believe me, take a good look at Craig and Pope. After watching this movie, see if you can honestly look your mom in the eyes while telling her you think they’re upstanding citizens who productively contribute to society. That’s what I thought.

I know I didn’t mention him much in this review, but I really liked Nathan Lane (Guy Pearce) who plays the senior cop. It has nothing to do with how I found him kind of sexy in a really weird Old Western gunslinger kind of way. It also had nothing to do with a weird desire to twist the ends of his funky moustache. Nope. It had everything to do with how he managed to make me feel like he only had J’s best interest at heart even though he was just using the poor kid to further his own agenda – bringing down the Cody clan.

Last but not least, Grandma ‘Smurf” Cody played by Jacki Weaver. She is dastardly, cruel, cold and absolutely ruthless in protecting what is hers. I am so happy she isn’t my grandma.

This movie grabs you by the balls and/or hair from the word “go” and doesn’t let go until the credits start to roll. That’s how good I think the writing is. This is a movie driven solely by the power of an excellently told story and the immense combined talent of the actors. There was nothing flashy, gimmicky, high tech or pretty about this movie. This is down and dirty, gritty, bare knuckled story telling at its best.