The upcoming TWD game will feature a new story never seen before in either the comic book storyline or the second season of the AMC TV show. 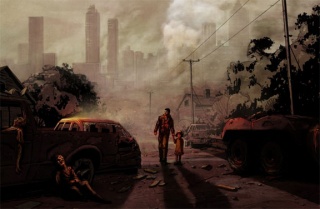 According to a report by Joystiq, the upcoming game will feature a new story never seen before in either Robert Kirkman’s current Image comic book storyline or the second season of the AMC TV show. The game will also feature a new protagonist that’ll inhabit the TWD world infested with the undead. Here’s an except describing the new character from Joystiq:

The game will follow Lee Everett, a criminal loosed from his police escort after it runs into an erstwhile zombie. Everett will unite with a seven-year-old girl named Clementine who Telltale says will provide a sort of moral compass for the convict.

As Rick Grimes tries to make his way into Atlanta, Lee and Clementine are trying to make their way out, which means they’ll cross paths with established series characters like Lilly and Glenn.

Everett and Clementine seem like a pretty dynamic duo for surviving a world gone mad. Though Everett seems tough enough, he’d better do something about getting shoes on that little girl, though. Folks without proper footwear don’t seem like prime zombpocalypse survivor material.

Similar to Telltale’s previous adventure based games, TWD will feature episodes and is due for a potential fourth quarter release just in time with the premiere of the second season.