Daryl is coming to The Walking Dead comic book. Check out what Kirkman has to say after the jump!

Despite the fact that Norman Reedus’ character, Daryl, entered the The Walking Dead TV series without ever having been a part of the comic book, he is now probably the most popular character in the series. From his angry beginnings, to the way he can take care of business that no one else can (See the end of last night’s episode), Daryl is probably the coolest and most complex character in the whole post apocalyptic universe that was created by Robert Kirkman. Now, it looks as though Kirkman is set to introduce him into the comic book as well!

Here’s what he told CBR:
“I’ve definitely considered writing Daryl in to the comics,” said Kirkman. “Norman is always pestering me about it. All I can say right now is that if you have been paying attention to the Internet we did just release a series of teasers called ‘Something to Fear’ for a new story arc that’s coming up and it’s a series of very threatening looking people with very specific weapons and one of them has a crossbow.” 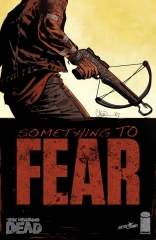