‘The Walking Dead’ Season 3 To Put More Focus On Carl.

Fans of the comic book know that Carl Grimes has some dark days ahead. It looks like the clouds are going to start gathering during season 3.

Fans of the comic book know that Carl Grimes has some dark days ahead. It looks like the clouds are going to start gathering during season 3. Recently, showrunner Glenn Mazzara sat down with TV guide to talk about the new season and, more specifically, Carl.

“We’re interested in exploring Carl as a child soldier in this war against the walkers,” said Mazzara. “He becomes a very, very effective, strong part of the group. He’s no longer the young child who needs to be cared for and who needs to be minded. That Carl is gone.”

In another interview with the LA Times, Mazzara addressed Carl’s penchant for running off and putting himself in danger which has become so prolific that it is on the verge of becoming a meme.

“Everyone wants to know why Carl’s not in the house,” he said. “Well, it’s boring to sit in a house. And he’s a little boy and he wants to mix it up and stuff. And he’s walking through the woods and finds a zombie trapped in the mud and he starts doing what any Huck Finn would do and starts throwing rocks at the monster. And then later that is the same zombie that pulls itself free and kills Dale. And the writers were very nervous about that, you know? It feels earned, but it’s a risk. Because Dale is a beloved character and if this other character is involved and responsible for that death, is the audience going to now hate Carl? But I thought the story was worth the chance.” 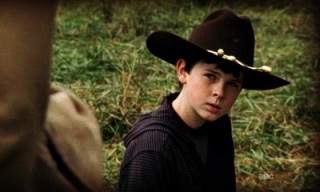