this week we will touch upon some highlights and provide you with links so that you are able to impress your friends with your undead knowledge.

Wow! So maybe we should call our undead news feature “The Past Few Weeks in Zombie News”. My apologies as Thanksgiving and a recent convention kept me from writing as much as I would like. So this week we will touch upon some highlights and provide you with links so that you are able to impress your friends with your undead knowledge.

Let’s start with a way to get some free zombie goodies. As always, we are giving away numerous undead items at Zombies & Toys. We have some signed art prints, movies, books, toys, and even dog ID tags all up for grabs! Many of these contests will end this weekend so enter now and prepare for the next wave of zombie contests! 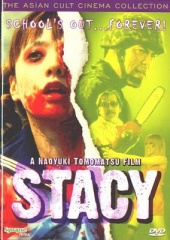 Speaking of contests, who wants a copy of the zombie film that only cost $75 to make? The British film, Colin, is not only one of our prizes this month but also one of our featured movie reviews. Of course, one zombie movie is never enough. We also took a look at Aaah! Zombies!! Blending an interesting mix of humor and gore with fun use of color added for flare, Aaah! Zombies!! will give zombie fans something to chuckle about. Our Dead Air review brought us back to the scary side of zombie cinema. l If foreign cinema and monstrous zombie are more your flavor, make sure to check out our review of the French film, Mutants. Finally, if you want a foreign zombie film with humor, check out our review of Stacy. 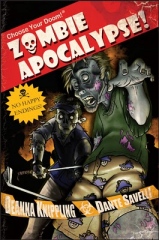 We featured a review of a very interesting book by Doom Press. Choose Your Doom: Zombie Apocalypse is a throw back to the days of the choose-your-own adventure books… Only with zombies! If the review leaves you wanting more, make sure to enter our contest for a free copy. We will have several copies of this book to give away. 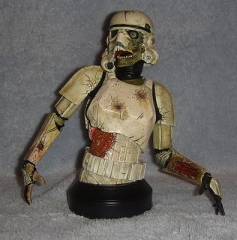 Our featured toy review was of the highly-anticipated Death Trooper bust by Gentle Giant Studios. Taken from a novel of the same name, Death Troopers are what you get when you cross zombies and Storm Troopers. Star Wars + zombies may be the greatest combination since peanut butter and jelly but does this collectible measure up? Read the review and be the judge for yourself. 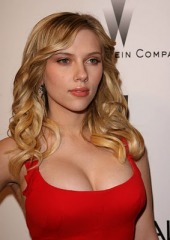 We also took a look at some fun, new zombie art. There were undead Bert and Ernie shirts , jazzy Dawn of the Dead prints, contests for a unique interpretation of the Zombies & Toys logo, and even some free downloadable art featuring a zombie who wants cupcakes instead of brains.

So, even though I have personally been busy these past few weeks, we still managed to bring you as much zombie news as we could find!