Avatar: The Last Airbender guilty of representing and continuing the generations of Hollywood discrimination? 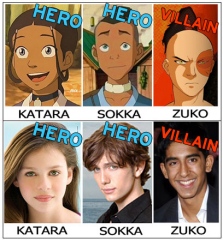 Protest over Paramount Pictures’ MTV Films and Nickelodeon Movies’ live-action film, Avatar: The Last Airbender continues to intensify and the website, racebending.com was recently established to provide information about the protest and how people can participate via petition and letter writing campaigns.

According to racebending.com, protesters have accused Paramount of racial discrimination. Particularly with initial casting calls which indicated a preference for Caucasian actors despite the fact that Avatar has been advertised by Nickelodeon executives as a “fantastical Asian world.”

From the site:
As fans of the original television show, we still hold the highest level of respect for the Avatar: The Last Airbender animated series and its culturally nuanced depiction of an Asian fantasy world. We desperately want to support The Last Airbender film, but we cannot in good conscience support its current incarnation and the generations of Hollywood discrimination it represents.

-Because the world is supposed to be Asian-based…but Hollywood has deemed that only white actors can populate it.

-Because according to the actors and creators of the movie, ethnicity is just a white person with a tan and some make-up.

-Because it is cultural appropriation (ie, Market research tells us that Asian things are cool! Just not the actual Asian people)

-Because this is a children’s film and children are being shown that only white heroes can exist in a fantasy world.

For more information and ways you can help, visit racebending.com.

One thought on “Protest Over M. Night’s Avatar: The Last Airbender Continues”