Check out the craptacular trailer for the mexican 3D reboot of Top Cat.

This is a weird one, it seems Mexican animation studios Anima Estudios and Illusion Studios have decided to make a 3D film using Hanna Barberas Top Cat character. The trailer below looks pretty whatever and cheap but it’s so strange that it’s going to be released in September in Mexico in 3D with no plans on a US release yet. Also the entire film is in Spanish since it’s for Mexican audiences.

A little information on Top Cat:

Created by William Hanna and Joseph Barbera.
Made his TV debut on September 27th, 1961.
The Top Cat show ran for 30 episodes.
In the ‘Futurama’ episode “That Darn Katz!” a picture of Top Cat can be seen.

I couldn’t find much more information on this in English so check out the trailer and let us know what you think.

After the trailer thoughts: 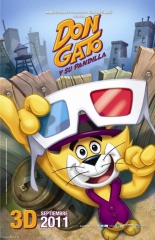 This looks pretty damn crumby to me and probably was just a paycheck for Hanna and Barbera at one point. What I can’t figure out is with all their characters why the hell would anyone want to make a Top Cat film?!? It’s insane! Are there really that many Mexican girls and boys frothing at the mouth for more Top Cat? Is the Top Cat enthusiasts of Mexico organization just that huge that animated film using both 2D and 3D animation and being released in 3D will make it’s money back? I am baffled by all of this and can only imagine that near the end of some big ass boring board meeting when the big wigs were tired and breaking out the whiskey a loan man got in front of them and pitched his dream project. Sadly that man’s dream project was a badass super robot battling ninjas that mutate into fire breathing lizards that befriend sharks and take back the earth from the evil reign of the electro zombies! This man was fired on the spot and the group of slightly drunk big wigs spun a fun wheel that landed on a picture of a cat thus we have ‘Don Gato’ the 3D animated feature!