It is real. It is official…. and it is a lot less sparkly than I would have imagined.

IN all the movies of the Twilight saga, the one thing everyone seems to be dying to see is what it looks like when two pasty people bump uglies. Well, apparently wishes do come true. Just like in the books, Bella and Edward will get to consummate their marriage vows in the upcoming film, Breaking Dawn. We’ve even got a pic to prove it! 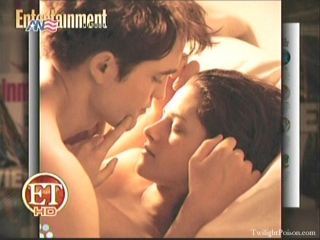 “It’s one of the most anticipated scenes,” director Bill Condon told the magazine. “I spent a tremendous amount of time thinking about it. The anticipation is part of it and you want to play with what people expect and maybe subvert it a little and surprise them.