A mini-tent city is growing outside the Nokia Theatre in downtown Los Angeles as fans camp out to make sure they see tomorrow’s premiere of “Twilight: Eclipse.” 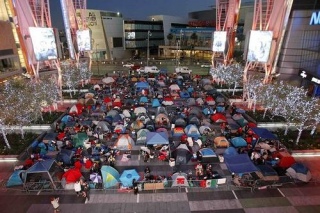 A mini-tent city is growing outside the Nokia Theatre in downtown Los Angeles as fans camp out to make sure they see tomorrow’s premiere of “Twilight: Eclipse.”

The first tens appeared Monday, but that number has since grown to the hundreds.

Over 9,000 wristbands are expected to be handed out allowing fans to enter the area for the movie’s premiere.

The crowd will be temporarily relocated on Wednesday, in order to make arrangements for the premiere and allowed back on the basis of their wristbands on Thursday. Fans will be given places along the borders of the area in order of their wristband numbers.

A 24-year-old Cal State Fullerton student, Kelly Orr, tells the ‘Los Angeles Times’ that it’s worth the effort to see the actors and maybe get an autograph or a photo.

“Ideally, they’ll be like, ‘Hey, you want to go to the party, because you look like fun. You don’t look crazy — even though you stayed out here for four days,'” Orr jokes. “It’s not realistic.”

The movie will premiere on Thursday, six days before it is set to release in the rest of the country on June 30, as part of the Los Angeles Film Festival.