We’ve got 15 awesome limited edition posters here to give away from The Hub TV Network to help celebrate the season finale of Transformers Prime.

Hey all, Hope you had a great Halloween, now let’s start the new month off with a new contest. We’ve got 15 awesome limited edition posters here to give away from The Hub TV Network to help celebrate the season finale of Transformers Prime.

This contest is only going to run for the next week, so be sure to enter for your chance to win! 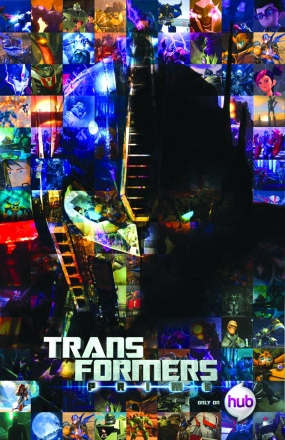 Here’s how it works:
1. You can enter once a day to win the featured prize.
3. Answer the “Question of The Day”
4. Be sure to follow us on Facebook and/or Twitter @youbentmywookie and RT: “Win A Limited Edition Transformers Prime Poster At YBMW! http://bit.ly/TvQn9J”

Contest Question: Would you rather be an Autobot or a Decepticon?

“The ‘Transformers Prime’ 26-Hour Takeover” event showcases one of The Hub’s most popular series and marks the first time that the network has devoted its entire schedule to one series. The 26-hour marathon will provide viewers with an unprecedentedopportunity to experience the entire story arc from the beginning of “Transformers Prime.” The series is produced by Hasbro Studios.

In the half-hour action series, archrivals Optimus Prime and Megatron once again face off in their legendary battle for Earth as the Autobots and Decepticons uncover clues to change the balance of power in the war, and also potentially reviving their home planet of Cybertron.

At the conclusion of the first 51 episodes that have been presented in the first two seasons, The Hub will present the all-new season two finale, “Darkest Hour,” which will forever change the “Transformers Prime” universe as Megatron sets in motion a plan forcing Optimus to make a decision that has a devastating effect on the Autobot team.

The Hub Original Series “Transformers Prime” was honored this year with two Daytime Emmy® Awards – including Outstanding Special Class Animated Program. The wins bring to four the total number of Daytime Emmy® Awards the animated series has received since it premiered in November 2010.