A mom who wants to tell you what you should be able to buy at Toys R Us, find out how to support Mezco and all adult collectibles

Let me start off by saying this about Mezco Toyz. They are a great company. We’ve had the chance to know them for many years. They not only produce some of the industries best collectibles, but they also do so in a responsible manner. When they put out merchandise that is not meant for the little kids, they clearly mark it on their packaging. 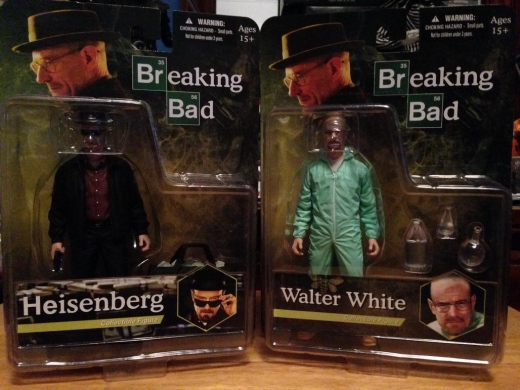 Now, let us talk about the idiocy that is currently unfolding on the internet. A Florida mom has now taken it upon herself to be everyone’s parent by trying to get the popular collectibles banned from Toys R Us.

Here’s what she told reporters for a Tucson Arizona TV station
“Toys-R-Us is well-known around the world for their vast selection of toys for children of all ages,” said mother Susan Myers in her petition against the toy line. “However, their decision to sell a Breaking Bad doll, complete with a detachable sack of cash and a bag of meth, alongside children’s toys is a dangerous deviation from their family friendly values.”

For the past several years, Toys R Us has had a growing selection of “toys” that were aimed at adult collectors. Companies like Mezco, NECA, McFarlane, and others have been selling toys for licenses like Spawn, Aliens vs Predator, The Walking Dead, and Nightmare on Elm Street. The toys have their own section and kept on higher shelves above the reach and eye line of the little pishers who want the newest Pokemon or My Little Pony toy. So, it’s not like we are talking about action figures for meth dealers mixed in with the Care Bears here.

Sadly, the story has picked up steam and was even covered on the Today Show.

Visit NBCNews.com for breaking news, world news, and news about the economy

**To give you an idea the ridiculous level of coverage this story is getting, the Today Show report ends with one of the hosts complaining that the crystal Meth accessories could be a choking hazard for little kids.

To help achieve her goal, the mom has taken to Change.org, where she’s collected over 1,000 signatures from like minded moms. We aren’t going to post the link to that signature here because we believe that the market should dictate what you can buy, not a handful of angry parents with sticks up their butt.

That said, we will give you this link to the counter petition that has been created by AFI who are trying to save the toy line from getting yanked out of TRU. To support Mezco’s Breaking Bad line, click HERE.

Yes, I know that this is not an impartial article. It doesn’t need to be. It is just common sense. These toys are clearly not marketed towards children. If they don’t belong in Toys r Us, then people will not buy them and they’ll get removed due to poor sales. We live in a free society. Nothing should ever be banned because someone finds it offensive.

While I would normally tell you to go directly to Mezco to pick up your Breaking Bad toys, today I’m going to suggest you either go into a Toys R Us store or buy them online from their site HERE. There’s no better way to combat stupidity than with the power of good sales.

Check out some of Mezco’s Breaking Bad Figures below: