As “The Big Bang Theory” gear up for its next season, we had the chance to sit and chat with the cast and crew. 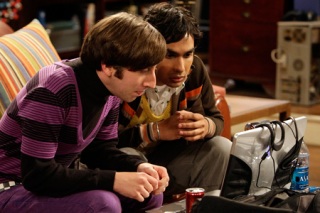 I’m happy to report that moment didn’t last very long and I was able to refocus on the task at hand – pick Bill Prady’s brain.

Bill actually researched this phenomenon and realized that it is an actual affliction. What amazed him was that the most outlandish characteristics are the one most grounded in reality. Fact is indeed stranger than fiction.

A few other tidbits he did mention was having some peripheral characters come back. Another idea they were kicking around was what would happen when “The Hot Indian” Rajesh Koothrappali’s job at the university were to be jeopardized, how it would affect his visa standing, what it would mean to have to go back and what his parents are like. Whether this was going to be an actual story line for the show wasn’t clear because the conversation turned its focus on to Penny.

Penny, to a certain extent, is a person the writers for the show have admitted to having in their life at some point. He summarized their Penny-like dopplegangers as “someone who is smart but doesn’t share their crazy passion. They just don’t GET the things they get but it’s not through lack of intelligence. It’s more like they have other things to do and going on in their life.” Over the course of writing for the show, one thing the writers and Bill realized is that “they DO get us. They may not share our passions but they DO get us.” For some of the writers, Penny reminds them of their mom in some way. For others, it’s their girlfriend. Bill admitted that he sees parts of his wife in Penny.

We asked if we’d ever learn more about Penny’s family, Bill simply said they’d explore it if the story were to come up. When asked about guest stars appearing on the show, he said they don’t stunt cast. Instead, their line of thinking runs along the lines of “I wonder what would happen if these guys met some crazy smart scientist people”…and then someone like George Smoot comes on the show.

Dr. George Smoot, recipient of the Nobel Prize in Physics, as well as the Einstein Medal, is one of the world’s most renowned astrophysicists. His research helped cement the big bang theory of the universe.

It took me a little while to wrap my head around that one. They got THE MAN who not only is the recipient of some insane awards but his research more or less proved the Big Bang Theory. The irony of that coupled with the title of the show is not lost on me. Apparently, it’s not lost on Bill either because that would explain why he let out a huge laugh and an exultant “THAT’S how we roll!”

Before he left our table with a cheery “Thanks, guys”, he left us a little teaser of what we can expect. He hinted that we’ll find out how they managed to find an interesting way to solve the Sheldon problem from Season Two’s season finale but that the solution carries “unfortunate reparations.”

Things that make you go “Hhhmm…..” 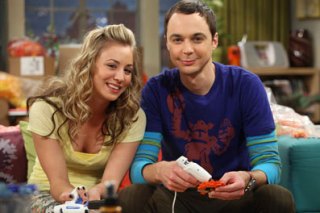 As Bill was whisked away, none other than Kaley Cuoco settled herself down at our table. I didn’t know what to expect from the woman who plays Penny but I wasn’t exactly prepared for the tropical storm I nicknamed Hurricane Kaley. The woman is a one person show.

The first thing she said to us was “I LOOOOOOVE talking about myself! I could do this all day!” When asked how she got the role, she shot us this look of incredulousness and said “I got it because I’m awesome.” While she didn’t exactly add “duh” at the end, it was kind of implied when she rolled those big eyes at us.

After giggling for a little while, she said the role was actually denied to her when the show was first written over 2 years ago. Things changed a year after she auditioned because she received a call to come back. Certain parts of the show was rewritten and they felt she was the best person to now play the role of Penny. Timing was given a lot of credit for her coming on the show because she feels things wouldn’t have worked out if she had signed up for the job when she initially auditioned.

She prefers comedy over drama because “I cannot be serious for more than two seconds. I love to laugh and make others laugh.”

Her initial fear wasn’t the science aspect of it. She happily admits to not learning any science from the show. In fact, she absolutely refuses to pick up anything related to science.

“I’m an actor. What am I going to do with science? I’m not gonna lie and say I learned something because then you’re gonna ask me what I learned and I have nothing to say.”

So if it wasn’t the science part of it that made her nervous, then what was? She said her biggest concern over getting the role as Penny was that “this was going to be another blonde next door thing. But it’s so not that. Penny, like myself, loves these guys so much. Actually, she wants to be friends with them more than they wanted to be friends with her.”