“Someone asked me if I can be his “samurai girl” when I was cosplaying as KOS-MOS from Xenosaga. Haha!”

It’s a new year and it is time to get started with one of our favorite features on Youbentmywookie, Girl Of The Month! This year’s very first GOTM is none other than Hikaru Jan. Like many of our other Girls of the month, Jan is the real deal. Not only is she a beauty, but she’s a real geek! We search high and low to make sure that our Girls of The Month are 100% Geek approved, no Munns allowed!

So, with that, Here’s Hikaru Jan! 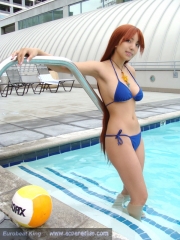 What were your favorite cartoons growing up?
1980’s Teenage Mutant Ninja Turtles. I was obsessed with that cartoon as a little kid. The obsession for this show began at the age of 4. I don’t know exactly why I was obsessed with it, but I remember owning T-shirts, slippers, stuffed toys, and almost every TMNT related item a child could ever want. Haha! I also enjoyed watching Sonic the Hedgehog (not to be confused with “Adventures of Sonic the Hedgehog”) on those early mornings before school started because the Sonic the Hedgehog games became an instant favorite when I first got my Sega Genesis and Sega Game Gear. My after school cartoons were Looney Toons and The Animaniacs. I loved those cartoons because anything was everything was made possible, nutty, and crazy! Other favorites were Captain Planet and the Planeteers, Reboot, Samurai Pizza Cats, X-Men, She-Ra, the list goes on!

What toys did you play with when you were a kid?
Video games, lots and lots of them! My first system being the Famicom. I also remembered playing with various old school Polly Pockets. I wish she was still made in “pocket” form instead of some weird abomination we see today… Oh and I will never forget the hours I spent playing with my Mighty Morphin Power Rangers action figures along with the zords! That was also one of my favorite shows growing up.

What was your favorite video game as a kid?
Super Mario Bros and Sonic the Hedgehog.

What games do you like to play now?
RPGs (Final Fantasy series), and survival horror (Resident Evil and Silent Hill) because they keep you thinking about different strategies on how to accomplish different tasks (like most games). If you don’t succeed, you try again with a new strategy. I enjoy these types of games because they always put me on the edge of my seat. I also like playing action games like Devil May Cry and Bayonetta.

What is your favorite Anime?
Black Lagoon because it’s not your stereotypical anime. It’s action, dark humor, military history, and epic fight scenes rolled into one. I also like the fact that the stereotypical women are very twisted.

What is it that makes Japanese Anime special compared to American animation?
This is a very tough question. This is all my opinion, but I believe Japanese Anime tends to be a little more “mature” than American animation, and I think anime has more complex storylines. There are different types of anime genres (comedy, romance, action, adventure, horror, etc…), and each series of anime tells a big story which cannot fit into just one 30 minute episode. I’d like to think that anime series are just one long, cool movie(s) divided into 30 minute episodes. American animation episodes seem to have one single short story per 30 minute episode. Sometimes they expand their stories in nth #-part episodes.

How did you get into Cosplay?
I got into cosplay in 2003 when I saw a flier in the Japan Town’s Kintetsu Mall for the Cherry Blossom Festival Parade. They were having a cosplay costume contest, and the winner(s) get to ride the float in the parade. I really wanted to be a part of the event, so I told my mom about it. I cosplayed as Lenne of Final Fantasy X-2. I had a great time and meeting fellow cosplayers made the day most enjoyable! I love geeking out with other geeks! 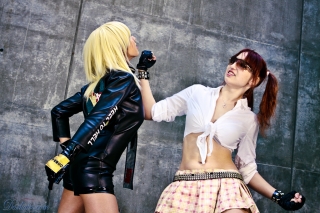 What is your favorite Cosplay that you’ve made?
Bayonetta. At first I did not want to cosplay as her when I saw all the images after Tokyo Game Show’s debut. But after playing the game for 10 minutes, I changed my mind! Bayonetta is very sassy, provocative and a hottie with weapons! I also have a thing for girls with glasses (and sexy British accents!)! So making this costume was a must!

What is your ultimate fantasy Cosplay and why?
My cosplay wishlist is ever growing, but I would really like to one day cosplay as Priss Asagiri’s hardsuit from Bubblegum Crisis.

Do you think you’ll ever make it?
In time, maybe. I’ve been having the supplies for it ready since last year!

What is the coolest opportunity that Cosplay has opened up for you in your life?
I got to sign autographs with Alodia Gosiengfiao, Ashley Gosiengfiao, Monique Dimanlig, and Jessica Ouano in the Philippines in a convention called ToyCon in June 2010. I even did a small commercial for Animax with Monique. I felt very honored to this with them, and it was a fun experience!

What did you want to be when you were growing up?
A veterinarian. I had a lot of pets growing up, and wanted to be around and care for animals. What really changed my mind about not getting into this field of work is that I would at one point have to put an animal down. I wouldn’t have the heart to do it.

If you could have any Superpower, what would it be and why?
The ability to go back in time because I would like to have a do-over in some past events in my life, and I also would like to see dinosaurs! I also better have the ability to fly along with this superpower!

What do you look for in a guy?
I like guys who are like me, fun and geeky! I like someone to share my love for cosplay, toy/figure collecting, anime, and video games with. Big plus if they’re into partying!

What is the strangest come on you’ve ever gotten from someone while in your Cosplay?
Someone asked me if I can be his “samurai girl” when I was cosplaying as KOS-MOS from Xenosaga. Haha!

Do you have any advice for the cool, yet geeky guys out there that just can’t seem to find a woman who appreciates their love of comics or toys?
Everyone finds their someone. Be patient, but don’t be afraid to get out there! I think attending conventions is a great way to meet their geeky soul mate. Just don’t ever be a creeper!

What projects do you have coming up and where can people go to see you online or at live events?
I am currently working on Kneesocks from Panty and Stocking with Garterbelt, and Mari Illustrious Makinami from Neon Genesis Evangelion. You can follow my nerdy life and find out what cons I will be attending on my Twitter or my facebook. You can also read my bloggings at hikaru-jan.com.

One thought on “YBMW Girl of The Month: Hikaru Jan”