The 1990 Captain America movie is widely regarded as the worst comic book movie of all time. On the eve of the Blu-Ray release, we sat down with the director, Albert Pyun, for the real story. 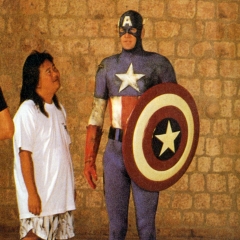 YBMW would like to welcome our newest contributor, Chris Lorusso. He’s a great writer and he’ll be bringing a lot of great new content to the site.

Nemesis, Cyborg, Mean Guns, Alien from L. A., and many more run down the list of famed sci-fi / fantasy movie director Albert Pyuns career. Since his first film The Sword and the Sorcerer he pretty much hasn’t stopped directing films both for theatrical release and the direct to video market. Say what you will about the quality of his films but, he gets them made and distributed. Yes some of them suffer from low budgets or poor scripts but in the end at worst they are great midnight hanging out with friends entertainment and at best they are a fun and enjoyable genre film with a little extra character than the usual low budget genre fare.

I got a chance to get a quick interview with him about his take on the 1990 film Captain America. He’s presently prepping a new directors cut Blu-Ray DVD release of the film and we’ll have more information on that when it becomes available.

CPL: What drew you to the project, what was most important to you in the story of Captain America?

Albert Pyun: I really liked Stephen Tolkien’s screenplay. That was a big key as I grew up a fan of the comic book. I thought the screenplay got to the essence of what I liked about Captain America as a child.

CPL: When the original budget was dropped substantially what made you move ahead and make the film under such massive budget constraints for a comic book feature?

AP: Well, we were already on location when the bottom fell out and had little choice by that point. Plus, we were told the funding was coming so we pressed ahead. When the funds never came, I gave my movie DECEIT to Menahem Golan to sell, so I could finish the movie at all.

CPL: Were you a fan of the Captain America comic book and the Marvel universe in general?

AP – Yes, I was. In fact until my Mom threw them out, I had the first issue of Spider-Man and early issues of Thor and Doctor Strange.

CPL: What can you tell us about the new scenes you’ll be adding in the Directors Cut Blu-Ray DVD with over 30 minutes of added footage, and what other extras will be on the disc? 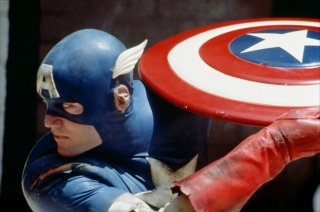 AP: It’s mainly scenes that deal with Steve Rogers’ confusion about his place in the modern world and whether the concept of America, right or wrong, was proper in the world today. Scenes that show his idea of heroism is sort of outdated. That the real heroes were individuals like Martin Luther King and Robert Kennedy. He struggles with the idea he’s just a symbol with no real weight. He understands that the idea of super heroes is outdated and the whole rah-rah aspect to heroism is misguided. He better understands the values that makes one an American and its not defeating super villains or ridiculous evil plots.

What I really liked about Stephen’s screenplay was how it showed false heroism for what it is…a commercial brand of propaganda. That battling super-villains is about as stupid and shallow a purpose as there is. Real heroes combat prejudice and other conditions which impose misery on humankind, like pollution, oil, commercialism. That’s why in the film, The Red Skull goes after the real heroes – Kennedy, King, etc. Great men. Real heroes.

CPL: Was there a large script change / rewrite once the budget had dropped, and if so what was cut from the original script?

AP: Sure there was. No funding meant the action had to be scaled way back.

CPL: Were you disappointed by the films poor reception by critics and fans alike?

AP: Not really. I knew what we were up against. I was only disappointed that the released version tried to make the material into a “super hero” movie which ran counter to what the film was about. We almost put “Imagine” by John Lennon in the film. We actually screened my cut for the representatives of the Lennon estate and they agreed to let us use it but the licensing was too expensive.

CPL: Many people, no matter if they like or dislike the film, say that Matt Salinger’s performance is excellent and he takes the character very serious. Was this your original plan or was that something Matt brought to the table and what can you tell me about working with him?

AP: Matt was a very serious actor and took the part and his work with commitment. That was the plan.

I realized the whole idea of that costume and character would not work unless we strived for some truth.

This was influenced by growing up a fan of the comic. I loved the pathos and confusion of the character.

CPL: What are your thoughts on the new Captain America: The First Avenger trailer?

AP: Well, its certainly a super hero popcorn movie. It’s not what we were trying to make in 1989.

CPL: It’ widely regarded as one of the worst comic book films ever made, what do you say in response to that?

CPL: How did you handle the bad press on this film and that it did not get an American theatrical run and was direct to video?

AP: I was already off making another film and my attention was on that. I was not aware of it except I knew I had my own copy of the film. I had already learned they’re going to do what they’re going to do, I have no control and I came to accept that reality. I also never had the need, at that time, for it to be theatrical. I think my main regret is that it wasn’t my version of the film that was released. That’s why I want to share my version now so people can see what I was trying to do.

Albert continues to this day to make film after film. Captain America (1990) will be screened at the Las Vegas Rave Motion Pictures Theater, Town Square on July 2nd. Albert will introduce the film with a Q&A session to follow the screening. His latest film, Tales of an Ancient Empire, has been picked up by Wrekin Hill / Lions Gate. It stars Kevin Sorbo, Olivier Gruner, and Sasha Mitchell. It will be showing at Fantasia film festival on July 29.

For more information on Albert Pyun and his films CLICK HERE.