This Sunday at 11 PM, a great new show called Toy Hunter will be premiering on The Travel Channel. Check out our Interview and then Tune in Sunday night! 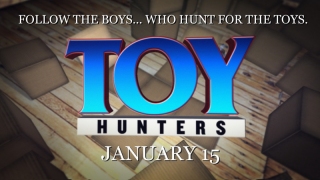 On Sunday, January 15th 2012, at 11:00 PM a new show about toy collecting and all things geek will be premiering on The Travel Channel. The show is called Toy Hunters and whether we get to see more than just this one great episode will come down to how many people watch/DVR/Tivo it. We all like to gripe when our favorite, geeky shows get pulled from TV, but if not enough people watch it than that is exactly what will happen.

The show, which is in the same vein as other popular shows like American Pickers and Pawn Stars Follows Jordan Hembrough, owner of Hollywood Heroes Collectibles in New Jersey as he hunts through warehouses, homes and all sorts of other places in in search of the rarest and most sought after collectibles. Then, the show follows him to the biggest conventions around the country where he tries his luck at turning toy gold into real gold.

One of the things that we really loved about the show is that he doesn’t just focus on old tin toys from a hundred years ago. In just the first episode he manages to uncover some of the rarest Star Wars and Thundercats toys ever made. This is definitely a great show for toy collectors and geeks of any color.

With that in mind, we wanted to sit down with Jordan to talk with him about his background in collecting and what why we all need to have our butts parked in front of the TV at 11 PM this Sunday Night.

What your your favorite toys as a kid?

I had all the Star Wars toys when I was kid, they were my favorite. As I got older, it’s the stuff I collected. Its what really drew back into collecting in my 20’s.

What drew you to continue collecting as an adult?

There was this store in Ridgewood NJ, called STARLOG. It was an extension of the famous magazine. I used to go in here all the time in my early 20’s. They had this section that sold vintage toys in these giant glass display cabinets. It looked like a museum. I went in one day and just saw all these vintage Star wars figures in the case… staring back at me. It’s right then that I started collecting again.

(Quick Followup to this story: I actually started working for the company and became one of the first four employees to open the Franchise Division. I went on to become the buyer for the chain, overseeing the collectibles inventory worldwide). 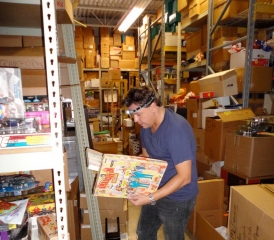 How long has Hollywood Heroes been around and how did you end up getting into the toy biz?

Well… remember that Starlog store I used to visit? I ended up working in the corporate office as a buyer. I oversaw 13 stores worldwide, focusing on the collectibles inventory. I was responsible for the purchasing and allocation of all the vintage toys, along with employee training on how to sell and take care of them.

When the company shut down, I purchased the remaining inventory and opened Hollywood Heroes. That was in 1995, and we have been going strong since.

What would you be doing if you weren’t in the collectibles business?

I really enjoy “the hype”. I would probably be doing something in advertising or marketing. My father ran a successful advertising company for years, so I would most likely follow in his footsteps.

How has the collectibles industry changed in the last ten years?

Well, with the Internet now everything has become so much more accessible. It’s a double edged sword. I mean, you can more easily find things you need for your inventory.. but then again, so can your customers. Early on, we lost a lot of our customer base due to Ebay. They were purchasing items from other sellers. Eventually though, they came back to us because they trust that we’re going to take care of them, and treat them right.

That being said, I think the Net is incredible tool for research. It allows collectors to really share their information with each other… and that overall is a positive thing.

What is the main premise of your new Travel Channel show, Toy Hunters?

The show follows me around the country as I dig through collections of toys. I am always on the hunt for something really cool. Maybe it’s a toy that has long been forgotten in the package, or a really uber-rare limited edition piece.

The real focus is the toys and the people who collect them. I have met some incredible people in my career, both sellers and buyers. Bringing their story to the audience is what I love the most.

How did you end up hooking up with the Travel Channel?

Toy Hunters is produced by SHARP Entertainment. They are the talented folks who brought you “Man V Food, Extreme Couponing, and Bert the Conqueror.” If you really want to amp up your Geek factor… they also do “Pumpkin Chunkin,” which is simply brilliant.

They contacted me last February and told me about the concept. I was hooked from the first meeting. It’s rare in this business when you find someone who you can both logistically and creatively work with. SHARP is based in New York, and they are a wonderful group of people who believe in the project. It was a perfect coupling.

It’s been a long process, but ultimately the end result is worth it. The show is wonderful… much more than anyone first realized it could be. Travel Channel picked up the show as a pilot to see how it would do. If it does well, I am hoping they invest in a series. 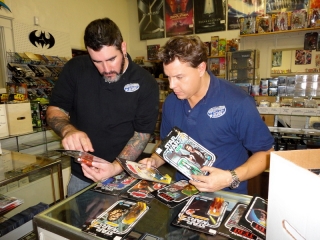 What’s the rarest toy you’ve discovered and will we see it on the show?

Well, I don’t want to give away too much.. but YES.. one of the rarest toys I have ever come across is on the show. In fact, TWO OF THEM are! You need to watch to see what they are.

Have you ever hunted down a toy to sell and then just couldn’t part with it? What was it?

Not as of yet… but I do have regrets selling some of the toys I have come across. One in particular was the original prototype for the vintage Boba Fett. It was truly one of a kind, and I know I will never see it again. But, it went to a good home and the collector who purchased it promised me visitation rights. ;)

What sort of effect do you think all these picking, pawn and hunter shows will have on the collectibles industry?

Well, I hope positive. I have heard some people concerned that this will raise the price of collectibles and people will be coming into the hobby just for the money. Honestly, I don’t think that’s going to happen.

This is going to bring attention to the collecting community around the world. It’s our way of saying “Hey, we love what we do… and we’re knowledgeable about it.” For the longest time, this hobby of “collecting toys” has had a negative stigma attached to it… but I believe that’s changing for the positive.

Ultimately, I don’t want people to read too much into the show. I want their main take away from this show to be one of “warm fuzzy memories.” I want people to see TOY HUNTERS and maybe say to them self… “I had that toy when I was a kid. This is so cool to see it again.”

If the audience can identify with the toys, and ultimately memories, we’re showcasing… I know we have done our job.

The show is premiering on this Sunday night, but it is just the pilot.

What needs to happen to take the show to a full series?

We need ratings. We need numbers. Simply put; I need “asses in seats.” The show needs to be viewed live, since DVRs and TiVo doesn’t count towards ratings.

It’s our chance to come together as a community, and stay up late and “Get our Geek on.” This is OUR SHOW… I’m hoping we can all get behind it and watch it. If the numbers are positive and show promise, we will hopefully go to series.

What are the hot trends right now in the toys that you hunt? Which licenses are hotter than ever and which formerly hot licenses are now duds?

Overall, the boys lines are holding their value more than the girls lines. Star Wars, GI Joe and Hot Wheels are always solid invesements. Lately, we have been seeing lines like Masters of the Universe and Thundercats coming back in vogue. This is primarily due to the relaunch of the vintage line of He-Man from Mattel. Thundercats got a boost from their new “re-imagined” animated series.

I think the one toy line I have been most surprised about is Strawberry Shortcake. It was a proven winner for years. Lately, however, the prices have leveled out and are a bit lower than what we saw them in say… 2000.

What sorts of adventures can fans expect to see in future episodes?

If we go to series… you can expect the very best in pop culture. We plan on covering all toy lines from the 1960’s-1980’s and beyond. Girls and boys lines are all on the table for upcoming road trips.

Oh yeah… and we have some rocking toy show and conventions planned for 2012 that you don’t want to miss!

I want TOY HUNTERS to be the ultimate destination spot for all your retro goodness!

So in short… tune in live Sunday Night to Travel Channel. Stay up late and Get your Geek On!