When I was a kid I literally played with rocks and stones. I wasn’t fancy like my cousins who had colorful wooden cubes with letters carved on to them. Enter Cubelets’ The Cubelets Discovery Set! A wild little modular electronic cube set that introduces young kids to the world of computational thinking (breaking down complex problems and finding repeatable solutions) and robotics. Each Cubelet block features software built into the little blocks of hardware that performs a function belonging to three categories: SENSE, THINK, and ACT. Together, they allow budding robotic engineers to assemble various “robot” constructions that can behave and do different things. Cubelets describe it as a visual hands—on way of coding. I describe it as just plain fun, because coding is as easy as snapping different magnetic Cubelet blocks together. Yeah, who’s fancy now?

Get yours today at: Modular Robotics 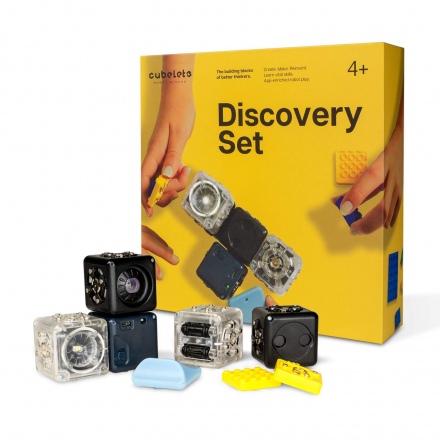 It is never too early to start a kid down the path towards STEM and there are few things we thought were cooler as kids than microscopes. Thames and Kosmos has come up with the perfect microscope for kids ages 4-6. It’s sturdy, adorable, and it gives kids the choice between exploring pre-printed slides or using the 8X magnification on any item of their choosing. Will this microscope show you the DNA of a fruit fly? No, but it will open up a whole new, tiny universe that exists at their fingertips.

Get yours today at: Thames & Kosmos 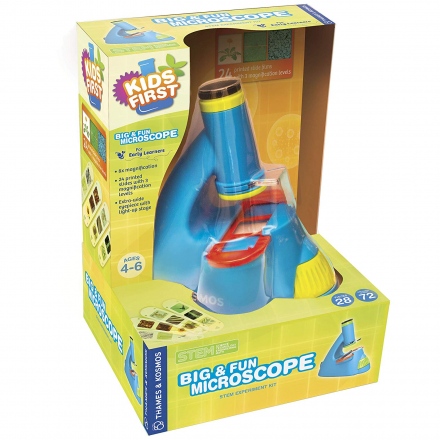 The Lohanu Ukulele Bundle makes the perfect gift for beginning musicians and experienced players alike. At the heart of this set is the concert size ukulele (LU-C). Featuring a Rosewood fingerboard and Sapele/Mahogany neck, the Lohanu ukulele arrives with Aquila strings installed. At 24 inches long, it is slightly larger than most entry-level ukuleles found at local music stores. The Lohanu offers a full sound with a resonance that carries while not buzzing like cheaper ukuleles.

While the ukulele is rightfully the spotlight, the included accessories certainly help make this the perfect gift. Lohanu includes everything you could possibly need to make its ukulele complete. As mentioned, it arrives with Aquila strings attached. But, you also receive a strap, picks, and pick holder. Remaining in tune will be easy because a digital tuner (with battery included) will be in the case. Yes, a padded case to protect and transport your new instrument is included. Taking this bundle a step further, an extra set of Aquila strings will make sure your first broken string is covered.

Get yours today at: Lohanu 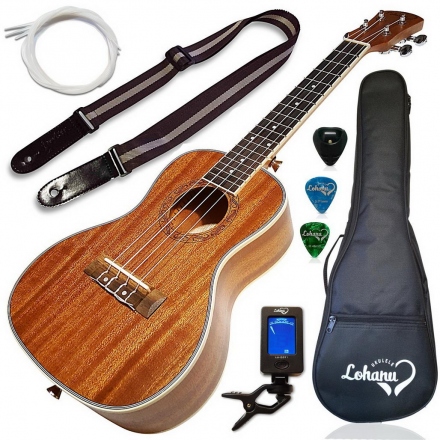 Guitar players agree that changing strings can be a tedious task. Of course, this is followed by the need to constantly check the tuning as these new strings adjust. The need to tune your guitar is a necessary inconvenience that can be simplified with the automatic tuners by Roadie. The Roadie 2 is able to tune not only electric and acoustic guitars, but also other stringed instruments such as a mandolin, banjo, and ukulele, and even our 12 string! Possessing a stronger motor, the Roadie Bass can handle the heavier bass strings.

These incredible devices operate by using vibration making them perfect in noisy environments. Simply adjust the rotary dial to select the tuning you want, place over the tuning key, and strum. The Roadie will take care of the rest. With an internal battery that charges by USB, you can change up to 150 strings on a single charge. To take advantage of additional features, there is even an optional app available for Google and iTunes. If you play a stringed instrument, there’s a chance that you already know about the Roadie 2 or the Roadie Bass and desperately want one. If you have a guitar or bass player on your gift list, you just found the perfect thing to present to leave them under the tree this holiday season!

Get yours today at: Roadie Tuners 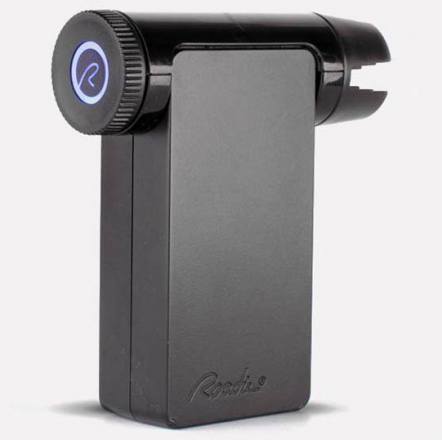 Art is one of the most important and often overlooked area of STEAM education for children. When it comes to things like drawing, kids can get frustrated that they don’t immediately have the skills to draw things the way they see them. In instances like that, we love the idea of a sketcher projector that gives them just enough guidance to learn the fundamentals, but still gives them the freedom to be creative on their own. The sketcher has two modes. The first mode includes several pre-loaded images that can be projected onto paper with step-by-step instructions on how to draw any of the illustrations. However, our favorite feature is that you can use the accompanying app to take a photo with your phone and then project it on to paper in a way that makes it easy for your child to draw a version of the photo! If you’ve got a kid between 5-12 years old who is showing an interest in drawing, consider getting them the SmART Sketcher Projector.

Get yours today at: Smart Sketcher 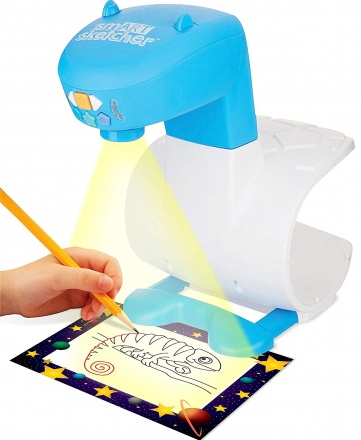 We love when a gift can crossover into multiple areas and that is exactly what’s happening here with Bepuzzled DIY Puzzle Vase. Yes, it’s a puzzle, but it is also an art project. When you purchase the vase, you also get a set of markers so that you can customize it however you like. Then, you take the vase apart and give the 3D jigsaw puzzle as a gift. When the giftee is able to re-assemble the vase, they end up with a functional vessel for a flower that you decorated especially for them! It is as fun as it is thoughtful!

Get yours today at: Bepuzzled

Totally Gross: The Game of Science

It’s always a great thing when you can combine learning and board games, especially if you can throw in slime and a lot of really disgusting information in the process. This game combines scientific trivia with fun science experiments you can do with household items and booger-like slime that you stretch from your nose (on the board) all the way to the finish line. Once you get there, you’ve got to do one big science experiment before you can claim victory. It’s science in action combined with a board game and we love it. This game is a ton of fun and perfect for boys and girls 8 years and older.

Get yours today at: University Games 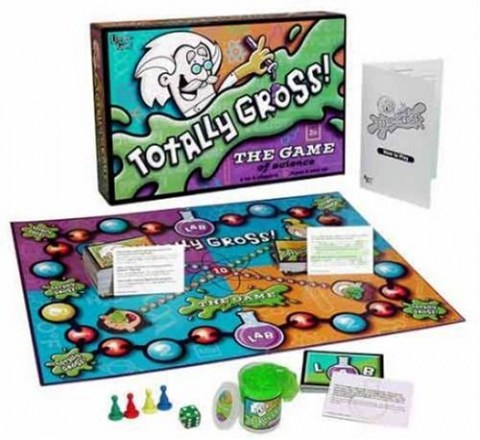 Spin Master has a new line of spy gear for kids and what kind of a spy would you be if you didn’t have a radar motion detector? Designed like a hand held camcorder, the Spy Gear Secret Radar Motion Detector is technically less of a “radar” detector as it is a motion detector. Don’t ask me how it works, because I have no idea. 3x AAA batteries not includes, this little toy gadget comes with a lot of confusing blinking lights and switches and an instruction manual I was forced to read. Additionally it can be hand held or propped thanks for a kick stand. Now as for whether or not it can actually detect motion… it’s a resounding, yes! The red LED lights will sequentially move as it waits for motion, the moment it senses motion, all four red LED lights will flash at once. There’s even an option for it to trigger sound to alert you when intruders are afoot!

Get yours today at: Spy Gear 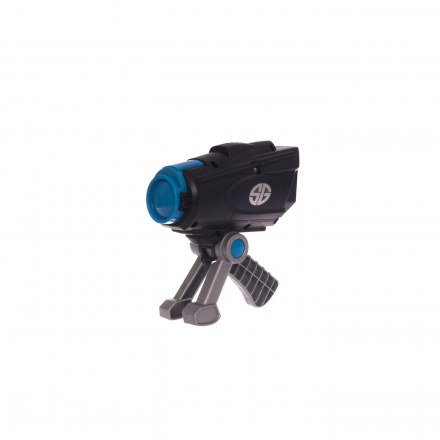 Continuing with Spin Master’s line of spy gear is the Secret Voice Changer. In a word of smart phone apps that can manipulate your voice recording, this may not seem as exciting. But for what it is, it’s still a lot of fun. You can record an audio clip and play it back at different pitch, making you sound like a witness testifying in the shadows against a mob boss. It also touts the ability to convert your recordings into different voice F/X such as “robot” and “ghost,” however I wasn’t able to get that particular feature to work. I didn’t test the length of the audio clip it is able to record, but I do know it can record at least ten seconds worth. The speakers are as good as one would expect from a toy, but nothing to write home about. Battery is included. 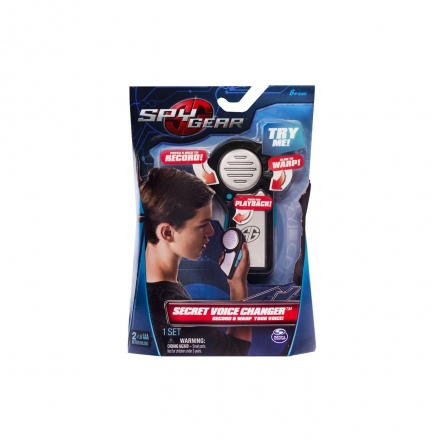 Another Spin Master’s offering from their line of spy gear is the iNite Night Vision Camera add on. The iNite Night Vision Camera itself is a camera that operates either independently as a camera that can be remotely controlled via smart phone or clipped to one. The pairing is made when you download a separate iNite App (available for both Android and iPhone) featuring controls for the night vision camera. As far as I am concerned, the night vision camera works sufficiently enough and can also operate during the day. Surprisingly, the recording quality is adequate and perhaps even better than those useless CCTVs. Compared to the Voice Changer, this is less of a toy but a gadget for true spies. It is, however, a shame that it can’t somehow be paired with the Motion Detector to stealthily capture things that go bump in the night. 4x AAA batteries not include. 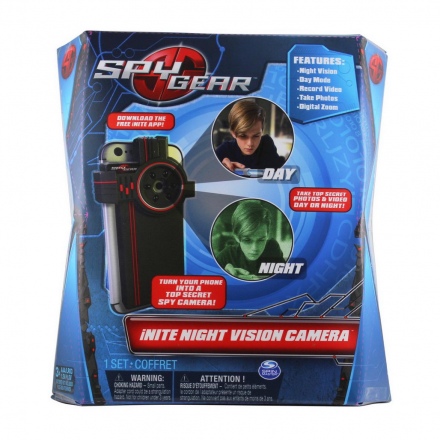 Who knew walkie talkies were in vogue again for spies? Certainly not I. But I assume in an age of digital paranoid and faulty encryption, some good old analog 2-way is the best way to send secret messages. The set comes with two compact and nicely designed walkie talkies and represent a nice throwback to the walkie talkies of the 90s before smart phones and absurd things like 5G. They even come with a button for sending morse code. In terms of the quality, however, they’re pretty disappointing. The range for communication is extremely short and the audio quality is about as clear as a being in a wind storm. Having grown up owning walkie talkies, this set might be the least exciting of all the Spy Master offerings because at the end of the day they’re just walkie talkies and not great ones at that. 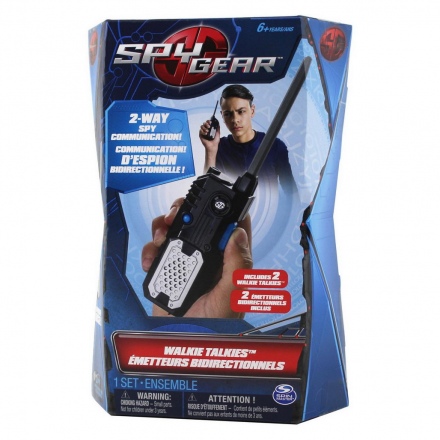