Another Year, Another Marvel and 7-11 Cross Promotion

You’d think that with a rumored Deadpool spin off and all the hoopla over re-shoots and whatnot, that Fox would have at least considered including him in marketing. 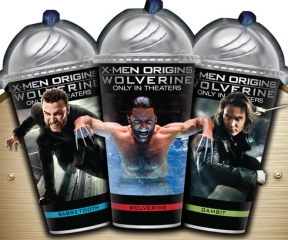 Superheroes have proven super for Slurpee® season at 7-Eleven® stores in past years with all the affiliated accessories, like cups, straws and fun Slurpee flavors. This year, 7-Eleven plans to continue to ride the wave of popularity with the comic book-cum-movie genre with a storewide tie-in to the theatrical release of X-Men Origins: Wolverine. This is Twentieth Century Fox’s new chapter in the X-Men franchise, featuring some of the most popular characters in the Marvel Comics’ stable of superheroes that premieres May 1.

Accompanying the superhero Slurpee cups featuring action-packed graphics of Wolverine, Sabretooth and Gambit is a new, remarkable Slurpee flavor – Mutant Berry. Billed as Hawaiian Punch Berry Limeade Blast, the Dr Pepper-created flavor was one of the top vote-getters in independent taste tests held last summer. Other winning flavors in a mass consumer taste-off last year will be featured throughout the summer Slurpee season.

“Fox movies and characters – from the X-Men franchise to The Simpsons – resonate strongly with Slurpee drinkers,” said Jay Wilkins, 7-Eleven brand manager for Slurpee and fountain beverages. “They’re irreverent, clever, daring and like to live life on the edge – all traits that appeal to the youngest Slurpee generation. It’s a great beginning to a fun-filled Slurpee season.”

Not only will X-Men characters appear at the Slurpee machine, but a Slurpee beverage will make a brief cameo appearance in the upcoming movie. Big super-heroes have big thirsts, and Blob, an X-Men of gargantuan proportions, is seen with a Slurpee beverage colossally bigger than any found in a 7-Eleven store. His likeness, with Slurpee drink firmly in hand, is one of four collectible X-Men characters adorning Slurpee straws in April. Retailing for $1.69, each X-Men Origins: Wolverine Slurpee straw comes with a removable figure and a base on which to display it.

Besides the collectible, lenticular Slurpee cups and character straws, a special Big Gulp® cup also has been created for the month-long promotion. Silver in color, the cup is inspired by Wolverine’s indestructible adamantium skeleton featured in the movie as part of the secret Weapon X program.

Movie promotions at 7-Eleven stores typically have been tied to 7-Eleven’s cold proprietary beverages, but this year, for the first time, X-Men Origins: Wolverine makes the leap to hot beverages. X-Treme Energy Cappuccino and a refillable stainless steel coffee mug sporting Wolverine’s trademark triple claw slash mark will be offered in 7-Eleven stores. Infused with taurine, a 12-ounce serving of X-Treme Energy Cappuccino, contains the same amount of caffeine as an 8-ounce can of Red Bull (or 8-ounce energy drink).

“Summer means school’s out, vacation time, beach volleyball and surfing, cruising with the top down, going to the movies, hanging out with friends, and, of course, drinking Slurpee beverages,” Wilkins said. “While it’s not quite summer yet, the Slurpee season really begins in earnest in April for 7-Eleven when warm weather starts to set in. X-Men Origins: Wolverine is our first really big Slurpee event for 2009, and we plan to have a lot of fun with it.”

Part of the entertainment appears on the www.slurpee.com homepage featuring the Mutant Berry Slurpee flavor, collectible X-Men Origins: Wolverine cups and straws as well as a link to watch the movie trailer. 7-Eleven also launched a BrainFreeze™ Laboratory on the Website, where visitors can upload pictures of themselves and friends for a face-freezing simulation that can be shared on Facebook or via email.

Wolverine is featured in the X-Men Origins: Wolverine videogame, which will be released May 1, the same day the movie premieres in theaters. Retailing for $59.99, the Xbox 360 and PS3 versions of the videogame can be pre-booked at participating 7-Eleven stores with a $5 deposit.

Assisting 7-Eleven in developing the partnerships and promotions for the X-Men Origins: Wolverine program is FreshWorks, 7-Eleven, Inc.’s advertising and marketing agency, which is a consortium of Omnicom companies. This is the same firm that helped 7-Eleven bring the Kwikee Mart to life for the 2007 premier of Fox’s The Simpsons Movie.

One thought on “Another Year, Another Marvel and 7-11 Cross Promotion”