Bandai Brings Back Power Rangers In A New Toy Line

Bandai America will bring the best-selling Power Rangers toy line back to its intergalactic, prehistoric roots with the “five teenagers with attitude” that started it all in a new collection of Mighty Morphin Power Rangers toys.

Go! Go! Get your Power Morphers – it’s Morphin’ time! Bandai America will bring the best-selling Power Rangers toy line back to its intergalactic, prehistoric roots with the “five teenagers with attitude” that started it all in a new collection of Mighty Morphin Power Rangers toys. The inaugural and most recognizable of 15 Power Rangers themes, this powered up Mighty Morphin line will feature both fresh and nostalgic play and collection experiences. Including action figures, vehicles, Megazords and role-play items aligned with the Mighty Morphin Power Rangers TV series premiering Saturday mornings January, 2010 on ABC Kids; the highly anticipated toys will begin to arrive at retail by the end of this year.

As the original Mighty Morphin Power Rangers took over the air waves – and your brain waves – in 1993 they made an unforgettable impact on pop culture. Showing that heroes come in every color, teamwork conquers all, and girls really can rule (unfortunately for good and evil), they took entertainment and play-time by storm. With three TV seasons, a motion picture and thousands of toys, the Power Rangers have spent 17 straight years in the top ten best-selling boys’ action figure brands in the US according to The NPD Group.

“The original Mighty Morphin Power Rangers captivated the country in 1993, and many kids who played with the toys now have children of their own,” said Tim Wills Senior Vice President, Sales and Marketing, of Bandai America Incorporated, “Families can experience their ‘morphin’ time’ once again as a whole new generation of kids are introduced to the Mighty Morphin Power Rangers toys.”

“I’m tickled pink to have had the opportunity to be a part of this juggernaut children’s action series and brand,” says Paul Schrier, former Mighty Morphin actor and director, “The good-natured humor and strong messages of teamwork and friendship really hit home with audiences everywhere and I can’t wait to see what’s next from this fountain of heroic action!”

To kick off the refreshed toy line, fans and families will get ready to battle not only for the salvation of the universe, but also for $11,000 in cash prizes in Bandai America’s “Power Up Video Challenge” contest. Consumers will be challenged to view a Power Rangers “cliffhanger video” online or at one of more than 2,000 movie theatres in the U.S., and then submit their own unique ending in a mini-movie or story-board at Bandai.com. Selected by both peers and a judging panel, the winning video and story-board entries will receive $10,000 and $1,000 in cash prizes respectively. Participants learn more and enter to win between October 1 and December 15 at www.Bandai.com. 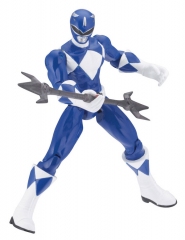