Because the World Needs a William Hung Trading Card 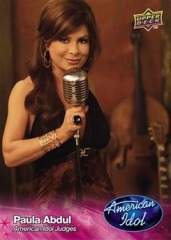 Idol production company FermantleMedia and trading card publishing giant Upper Deck have teamed up to launch a new line of trading cards featuring images of past and current contests as well as judges and hosts of Fox’s most watched primetime show.

The 138-card line is set to debut April 21 with six special cards autographed by past Idols that will randomly be inserted into the five-card packs. Regular cards will feature both past winners like Ruben Studdard and Carrie Underwood, rejected hopefuls such as William Hung and Nick Mitchell, to current stars such as Danny Gokeys and Adam Lambert.

According to Nora Won, FremantleMedia senior manager of consumer products, “The ‘American Idol’ brand has always been really strong in the interactive space.”

“With the trading cards, it’s an old school way of interacting with the fans. It’s another form of expression for the fans to demonstrate their connection with the show and collect their favorites.”

“That remains to be seen,” said Wong.