Barbie’s been around since 1959 and has had 124 careers, ranging from, prostitute, paratrooper to superheroine. Today, Mattel has officially announced her 125th job as a computer engineer (you can tell because she wears glasses and has a pink laptop!)

Barbie’s 125th career is also significant because for the first time ever it was decided entirely by online vote, which to be honest, makes it kinda bias.

Consumers loudly campaigned for another Barbie® career. The winner of the popular vote is Computer Engineer. Computer Engineer Barbie®, debuting in Winter 2010, inspires a new generation of girls to explore this important high-tech industry, which continues to grow and need future female leaders.

“All the girls who imagine their futures through Barbie will learn that engineers – like girls – are free to explore inﬁnite possibilities, limited only by their imagination,” says Nora Lin, President, Society of Women Engineers. “As a computer engineer, Barbie will show girls that women can turn their ideas into realities that have a direct and positive impact on people’s everyday lives in this exciting and rewarding career.” 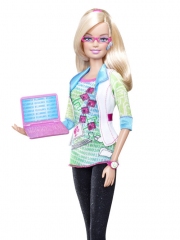