Couture, Ortiz, Penn Among Six In Second Round 5 UFC Series

Round 5 unveils the members of its UFC Series 2 which includes UFC stars Randy “The Natural” Couture, Tito “The Huntington Beach Bad Boy” Ortiz, B.J. “The Prodigy” Penn, and more! 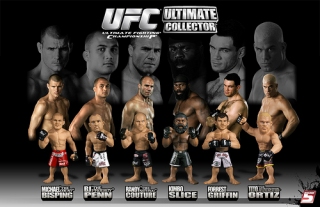 With its first series of collectible UFC-branded figurines due to hit shelves throughout North America by next month, Round 5 today unveiled the members of its UFC Series 2, as announced by Barron Lau, Round 5 CEO and co-founder and Damon Lau, president and co-founder. Figurines for UFC stars Randy “The Natural” Couture, Tito “The Huntington Beach Bad Boy” Ortiz, B.J. “The Prodigy” Penn, Forrest Griffin, Michael “The Count” Bisping and Kevin “Kimbo Slice” Ferguson are scheduled to be available at retail in the second quarter of 2010.

As with UFC Series 1, the six Series 2 collectibles will be presented in a UFC-themed packaging that includes action photos of each respective fighter’s memorable moments as well as a short biography.

Round 5 collectible figures may be purchased at leading North American retailers; a list can be found at www.Round5MMA.com.

“We wanted to follow up our initial UFC Series with another set of names that spread across the spectrum of the sport,” said Damon Lau. “We’re excited to include some of the most popular fighters ever in guys like Randy Couture, Tito Ortiz and B.J. Penn, as well as Kimbo, who has attracted a whole new set of fans to the sport.”

“We have taken great care in selecting this important UFC Series 2,” said Barron Lau. “In addition to the standard figurines, we are planning some Limited Editions and other versions of these athletes that we think collectors will really enjoy.”

Couture is one of the sport’s most enduring and popular figures, having begun his career more than a decade ago. His imprint on the UFC is indelible, not just through his multiple Heavyweight and Light Heavyweight Championships but the many fighters who he has influenced and the legions of fans who continue to follow him. He is scheduled to face another MMA pioneer, Mark Coleman, on Feb. 6 at UFC 109.

Penn has won titles at both lightweight and welterweight and has headlined some of the most-anticipated cards ever. The Brazilian Jiu-Jitsu champion is the current UFC lightweight beltholder, and has victories over some of the biggest names in the sport’s history. Hugely popular, Penn was a quick study in Jiu Jitsu, earning his black belt in just three years, and rose through the UFC ranks quickly, earning a title shot in his fourth pro fight and winning the belt in his ninth.

Known for his exciting, explosive fighting style and high-profile lifestyle, Ortiz held the UFC light heavyweight championship for more than three years, successfully defending it five times. He continues to compete, and it was recently confirmed that he will be a coach in The Ultimate Fighter 11 and will fight Chuck Liddell at the end of the season.

The MMA world was first introduced to the personality and punching power of Griffin in the first season of The Ultimate Fighter, beginning a road that led to a light heavyweight championship at UFC 86 and appearances at the top of cards. He has forged a 17-6 MMA record, and his patented “sprawl and brawl” style has led to numerous UFC “Fight of the Night” honors.

Once the “hope of British MMA,” Bisping dominated the competition on the way to The Ultimate Fighter 3 light heavyweight championship, then showed he’ll be a force in the UFC middleweight division for years to come. Sometimes controversial, often polarizing but always exciting, the brawler has an 18-2 record, solidifying his stature as a notable fighter in the States as well.

Slice burst on the fight scene in 2007, bringing the reputation he gained from millions of Internet viewings of his backyard brawls into the cage. He hit the big stage with nationally televised, prime-time broadcasts, then earned a UFC bout by competing in the latest edition of The Ultimate Fighter, winning his debut in the promotion last month.