“Hello Kitty is an inspired choice for a momentous co-branding that will expand the reach and appeal of both DC Comics Super Heroes and Sanrio properties.” 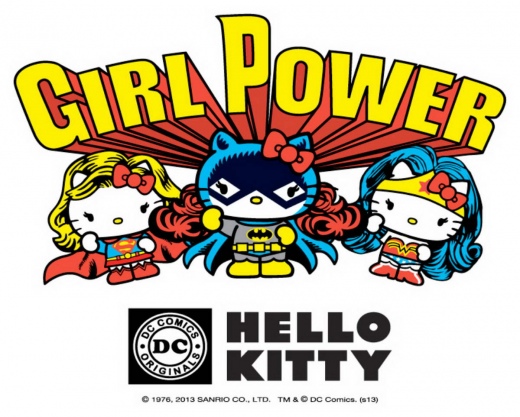 Los Angeles, CA – June 18, 2013 – Warner Bros. Consumer Products, in partnership with DC Entertainment, and Sanrio, creator of the global icon Hello Kitty, announced today they will be partnering to license a new brand collaboration that will feature Hello Kitty dressed up as her favorite DC Comics Super Heroes, including Wonder Woman, Superman and Batman.

“Hello Kitty is an inspired choice for a momentous co-branding that will expand the reach and appeal of both DC Comics Super Heroes and Sanrio properties,” said Brad Globe, president, Warner Bros. Consumer Products. “This unique partnership joins two powerhouse brands that have a universal popularity across a variety of demographics and we know the collaboration will thrill fans of both properties.”

“Character cross-overs have been a classic Hello Kitty spin off for years and our fans are always in search of the latest collaborations,” said Roberto Lanzi, Operating Officer, Sanrio Co., Ltd. “We are sure that this project will soon create a new collection fever.”

“Our strategic focus will be on working with best in class licensees and retailers who reflect the power and potential of this groundbreaking co-branded collaboration. We will work together to deliver must own products that will drive innovation in licensing,” said Pilar Zulueta, Executive Vice President and General Manager, Warner Bros. Consumer Products EMEA.

“We are thrilled to partner with Warner Bros. Consumer Products and DC Entertainment to give Hello Kitty ‘super hero powers’,” said Stefano Mastropietro, COO, Sanrio GmbH. “Both Hello Kitty and the DC Comics Super Heroes are universally beloved, and this fun initiative is sure to pack a playful punch in the EMEA territories.”

About Hello Kitty
Hello Kitty was born in London in 1974.Throughout the years she has become one of the most unique and interesting characters ever created, a worldwide social icon with relevance to women of all ages, ethnicities and economic backgrounds as well as an inspiration to artists and designers. Her motto says: you can never have too many friends.