The limited edition iconic KITT car vehicle based on the cult 80’s TV series “Knight Rider” will come with electronic lights and sounds as well as a Michael Knight action figure that fits inside KITT!

EE Exclusive Knight Rider KITT Vehicle with Michael Knight will retail for $59.99 and won’t be available until January 2013.

From the release:
Entertainment Earth Exclusive! The Hoff is back! Based on the 1982 TV series Knight Rider, this is the best toy KITT money can buy. Not only does it feature spinning wheels and opening doors, it has lights and sounds, too. But wait, there’s more! It’s a limited edition, roughly 13-inch long vehicle based on a 1982 Pontiac Trans-Am that’s compatible with many 3 3/4-inch scale action figures. And we included one! Get your very own 3 3/4-inch David Hasslehoff as Michael Knight Action Figure… available only in this set!

The Knight Industries Two Thousand (KITT) is here to save the day, and this exclusive set brings two of the 1980s’ most beloved television icons together again! 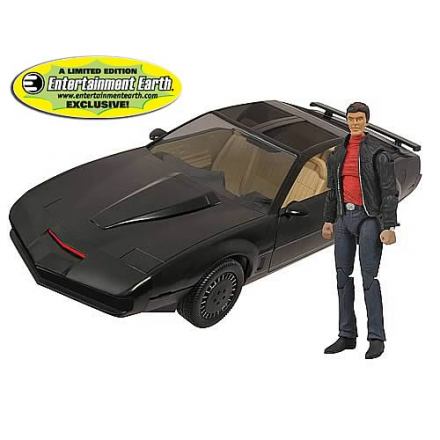