This might be considered a small spoiler, but Jakks Pacific has revealed their upcoming line of “Men in Black III” collectible action figures and accessories.

This might be considered a small spoiler, but Jakks Pacific has revealed their upcoming line of “Men in Black III” 4″ collectible action figures and accessories. It gives us our first look at some of the other characters that will be in the film as well as some classic MiB weapons such as the cricket and neuralyzer. 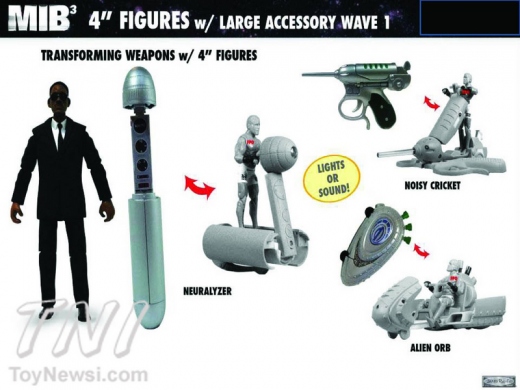 MIB 3 BASIC AF W/SMALL ACCESSORY ASST
Agents J and K, operatives for the secretive Men in Black organization, return next May in an all-new film, Men in Black III, reuniting Will Smith and Tommy Lee Jones as J and K respectively. These action figures bring the characters of the forthcoming film to life, and each comes with a small accessory based on the film. Blister card packaging.

MIB 3 BASIC AF W/LARGE ACCESSORY ASST
When Earth is threatened by alien invasion, the secret agents of the Men in Black organization are there, and none are better at their jobs than agents J and K! After a decade since their last appearance on movie screens, they return this summer in Men in Black III, and these action figures recreate the film’s characters, and each comes with a large accessory. Blister card packaging.

MIB 3 BASIC AF W/DLX ACCESSORY ASST
The secretive agents of Men in Black protect the Earth from alien incursions, and this summer its two greatest agents, Agents J and K, return this summer in Men in Black 3. These action figures bring the characters of the film to life, and each comes with a deluxe accesssory. Blister card packaging.

MIB 3 ALIEN INVASION AF ASST
Stage your own alien invasion with these new Men in Black 3 action figures! Based on next summer’s blockbuster film, these Alien Invasion figures will give Agents J and K antagonists to battle against! 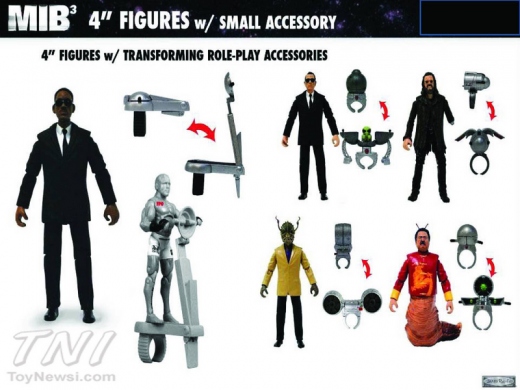 MIB 3 TALKING FRANK THE PUG 6-IN PLUSH
One of the most popular characters in the Men in Black films is Frank the Pug. While he looks like a pug, in reality Frank is a Remoolian trapped on Earth, and he works with the Men in Black organization. This 6″ plush recreates the film’s character, and when you squeeze it the plush will speak! 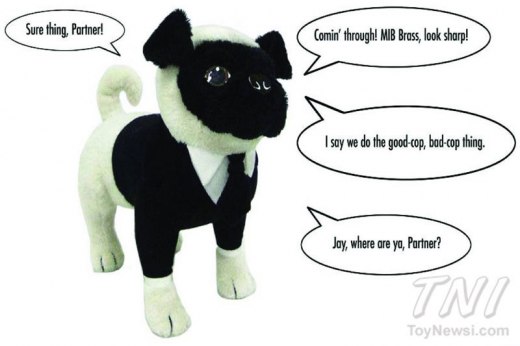