Dangerous and deadly things happen in the woods near Camp Crystal Lake… people suffer, people die… all at the hands of an undead killing machine wearing a sack over his head!

Dangerous and deadly things happen in the woods near Camp Crystal Lake. They say that a stalker haunts the night, wearing a hockey mask and wielding a butcher’s knife. They say that the teenagers who come there will never leave, for when Jason Voorhees strikes, there will be blood! This PREVIEWS Exclusive brings the terror of Friday the 13th and Camp Crystal Lake to life as a 7″ tall action figure with a bag instead of the signature mask on his head! Blister card packaging. 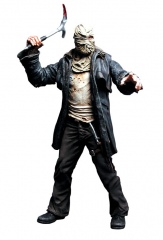