This fall, Hasbro plans to launch a new action figure line based on the film’s prehistoric predators exclusively at Toys“R”Us stores across the country. 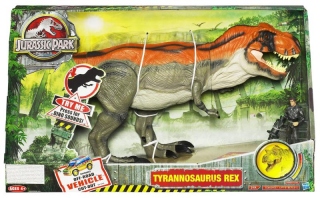 There’s been talk back in May that Hasbro was planning on release a new line of Jurassic Park toys as an exclusive at Toys”R”Us. Now Hasbro has officially announced the North American release of Jurassic Park as a Toys “R” Us exclusive line, due this Fall. Below is the press release:

PAWTUCKET, R.I.–(BUSINESS WIRE)–Hasbro, Inc. (NYSE: HAS – News) has announced plans to unleash the legendary dinosaurs from Universal Pictures’ Jurassic Park, one of the most powerful franchises in motion picture history. This fall, under a licensing agreement with Universal Partnerships & Licensing, Hasbro plans to launch a new action figure line based on the film’s prehistoric predators exclusively at Toys“R”Us stores across the country.

“Jurassic Park is one of the most successful film franchises of all time and has a passionate fan base,” said Derryl DePriest, Vice President of Marketing at Hasbro. “Dinosaurs are also tremendously popular with kids, and Jurassic Park is the mark of authenticity when it comes to realistic and exciting dinosaur play.”

“Since the dinosaurs of Jurassic Park first stomped onto movie screens more than 15 years ago, they’ve captured kids’ imaginations,” said Karen Dodge, Senior Vice President, Chief Merchandising Officer, Toys“R”Us. “There is no better place to find toys based on kids’ favorite characters than Toys“R”Us, and we’re excited to be the only retailer to offer kids and collectors official Jurassic Park action figures.”

“Jurassic Park remains the quintessential dinosaur brand,” said Stephanie Sperber, Executive Vice President, Universal Partnerships & Licensing. “The movies still rank as one of the top five trilogies of all time, and with Hasbro and Toys“R”Us behind the line, we know there will be great demand for the product. We truly have a winning combination on our hands.”

Now, kids can assemble their own dino army with this collection of authentic Jurassic Park dinosaurs! With two dinosaurs in each pack, this assortment allows children to create amazing dinosaur adventures.

Ages: 4 & up; No batteries required

Each deluxe two-pack in this assortment comes with a dinosaur and a “Dino Tracker” action figure that is equipped with an accessory that lets them track their prey. Now, kids can determine who will win the hunt –dinosaurs or humans.

Ages: 4 & up; No batteries required

The battle is coming! These fully articulated dinosaurs battle each other and have “dino-damage” to show for it. Each dinosaur lets out a fierce roar when kids activate its individual attack action. To create a more realistic battle, kids can also press the “dino-damage” to hear the dinosaur howl.

The king of the dinosaurs has arrived! This massive T-Rex comes to life with multiple growls, roars and howls and even a “bone crunching” sound effect for when it eats its prey. Additionally, its motion activated stomping sounds are sure to strike fear into humans and other dinosaurs alike. This giant dinosaur comes with a “Dino Tracker” action and a weapon that really fires. As an added bonus, the back of the box has an illustration that can be cut out and assembled into an off-road vehicle.

Since Universal Pictures and Steven Spielberg’s Amblin Entertainment first joined forces to unleash an adventure over 65 million years in the making, Jurassic Park has become the “premier” and “authentic” dinosaur brand the world over. When Jurassic Park was released in 1993, it became an instant phenomenon. In the years that followed, two additional films were released – The Lost World: Jurassic Park and Jurassic Park III – bringing the trilogy’s worldwide box office total to more than $2 billion. The franchise continues to resonate with consumers worldwide via consumer products, popular attractions at Universal Studios Theme Parks and annual airings of the three films on a multitude of television networks.

Hasbro, Inc. (NYSE: HAS – News) is a worldwide leader in children’s and family leisure time products and services with a rich portfolio of brands and entertainment properties that provides some of the highest quality and most recognizable play and recreational experiences in the world. As a brand-driven, consumer-focused global company, Hasbro brings to market a range of toys, games and licensed products, from traditional to high-tech and digital, under such powerful brand names as TRANSFORMERS, PLAYSKOOL, TONKA, MILTON BRADLEY, PARKER BROTHERS, CRANIUM and WIZARDS OF THE COAST. Come see how we inspire play through our brands at http://www.hasbro.com. (C) 2009 Hasbro, Inc. All Rights Reserved.

UP&L oversees Universal’s consumer product licensing, film and home entertainment promotions, and all corporate alliances for Universal’s theatrical, home entertainment, theme parks and stage productions. This dedicated division is also responsible for monetizing the Studio’s vast library of films and characters through licensing, branding and marketing opportunities. UP&L is part of NBC Universal, one of the world’s leading media and entertainment companies in the development, production, and marketing of entertainment, news, and information to a global audience. Formed in May 2004 through the combining of NBC and Vivendi Universal Entertainment, NBC Universal owns and operates a valuable portfolio of news and entertainment networks, a premier motion picture company, significant television production operations, a leading television stations group, and world-renowned theme parks. NBC Universal is 80%-owned by General Electric, with 20% owned by Vivendi.

Toys“R”Us, Inc. is the world’s leading dedicated toy and baby products retailer, offering a differentiated shopping experience through its family of brands. It currently sells merchandise in more than 1,500 stores, including 847 Toys“R”Us and Babies“R”Us stores in the United States, and more than 700 international stores in 32 countries, consisting of both licensed and franchised stores. In addition, it sells extraordinary toys in two FAO Schwarz stores in the United States. With its strong portfolio of e-commerce sites including Toysrus.com, Babiesrus.com, eToys.com, FAO.com and babyuniverse.com, it provides shoppers with an unparalleled online selection of distinctive toy and baby products. In addition, the company operates ePregnancy.com, an online resource for parents. Headquartered in Wayne, NJ, Toys“R”Us, Inc. employs approximately 72,000 associates worldwide. The company is committed to serving its communities as a caring and reputable neighbor through programs dedicated to keeping kids safe and helping them in times of need.