During San Diego Comic-Con, Hasbro asked fans to vote for their top three Marvel Legends figures that they wanted to see included in the next wave of 2-packs. Hasbro has now released the polling results and the winners of the 2010 Marvel Legends Fan’s Choice Poll are *drum roll please*:

These three figures will now make it into the next wave of Marvel Legends 2 packs along with three additional figures picked by Hasbro to be announced later. 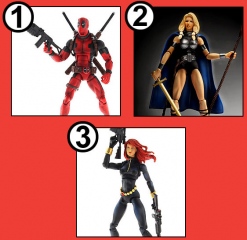