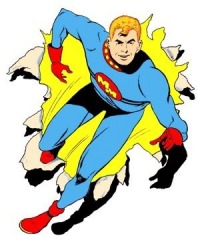 The latest buzz over the weekend is over Bleeding Cool site’s report that Hasbro is celebrating Marvel Comic’s acquisition of the Marvelman character by releasing an exclusive Marvelman (Miracle Man) action figure at this year’s San Diego Comic Con 2010. This is what was reported:

“Last year [at SDCC], Joe Quesada announced that Marvel had bought the rights to the Marvelman character from Mick Anglo. Last month we discovered Marvel were publishing a number of classic Marvelman strips from the fifties and sixties. And now it seems Hasbro are getting in on the act with a Marvelman toy. And making it a San Diego 2010 Exclusive.

Negotiations over the rights to the Alan Moore/Garry Leach/Alan Davis/Chuck Austen/Rick Vietch/Jon Totleben/Neil Gaiman/Mark Buckingham run on the book from the nineteen eighties have still not been fully nailed down, so the odds are that the character will be based on the original Mick Anglo designs rather than the Garry Leach look.”

We’ll have more as the story unfolds. Below is the Leach design while the image at the top is Anglo’s. 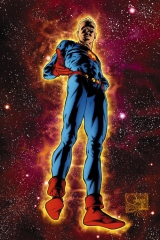