Check out the sweetest looking Ecto-1 that has ever been created.

The Ecto-1 from Ghostbusters is probably one of the top five coolest cars ever to grace pop culture. The Back to the Future Delorean and The Batmobile would also easily make that list. There have been a lot of great Ecto-1 Collectibles over the years. I’ve even got a small 1/64 scale one on my desk right next to me, but it can’t hold a candle to the 1/18th scale Ecto-1 that Hotwheels is going to be releasing in December.

The Ecto-1 is the legendary vehicle that the Ghostbusters used to travel throughout the city busting ghosts. Thevehicle used for the Ecto-1 was a 1959 Cadillac professional ambulance, built by the Miller-Meteor company and converted by Universal Studios.

The die-cast collectible is going to be limited to 10,000 pieces and is probably going to sell out pretty darned fast. 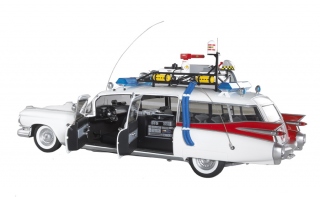