Unfortunately, the figure still doesn’t answer the age-old question of “how does CatDog poop?”

Jason Freeny’s XXray figures have been some of the coolest and most unique toys to hit the market over the last few years. Up till now, he’s tackled characters from Adventure Time, The DC Universe, Rubber Duckies, Gummy Bears, and Loony Toons. Now it looks like he’s entering into the world of Nickelodeon with what appears to be a teaser image of an upcoming dissection of the Nick cartoon CatDog.

Unfortunately, the figure still doesn’t answer the age-old question of “how does CatDog poop?” However, this means that there could be more Nicktoons coming our way in the XXray line. Think of it. We could be on the verge of dissected figures of characters like Ren, Stimpy, Spongebob, Patrick The Starfish, Rocko, Arnold, The Thornberries, and tons more! 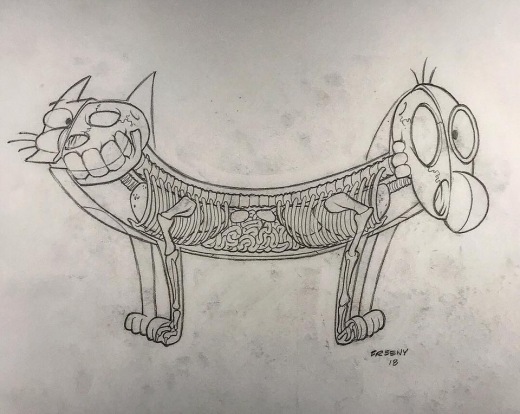