The world of collectibles is a fickle mistress, but Living Dead Dolls are going strong into their 13th year. Check out some great people who have devoted their lives to bringing them to the masses!

YBMW readers, I have traveled the lands of the dead to bring news to you O’ dear readers. These lands were filled with indescribable horrors, wretched beings, and a ton of cool dressed up dead babies! Then I realized I was just writing an article on a couple great Living Dead Doll stores and snapped out of my hell induced fever dream.

The world of collectibles is a fickle mistress to say the least. What is hot one day is selling for a dime on eBay the next. That just hasn’t been the case with The Living Dead Dolls. They’ve stood the test of time for thirteen years and have given their fans so much to love about them with every new series that they are sure to be going for thirteen more.

One thing we found really impressive about just how popular Living Dead Dolls are is that there are even stores popping up around the country devoted entirely to all things LDD!

MEZCO pointed us in a few directions and we came across these two killer stores that we think Living Dead Dolls fans should know about. 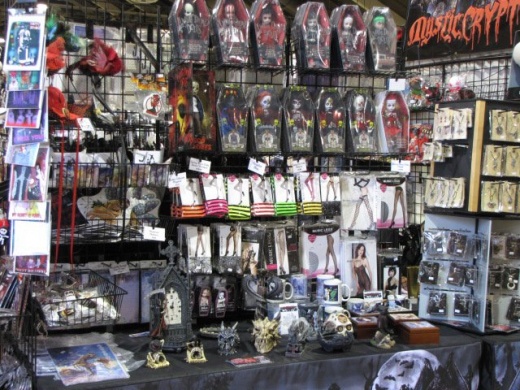 The Mystic Crypt is a cool little place that specializes in all things Goth and has one hell of a Living Dead Dolls collection for sale. Jamie, the owner, says that since they opened three years ago they’ve carried every Living Dead Doll. She was an avid collector of the dolls before ever opening the store which of course gives her first hand knowledge of what her clientele is looking for and likes.

As far as what the fans like most, Jamie tells us that Chucky is their most requested doll, though sadly, LDD has yet to make one. The second most requested doll is Sybil which is sold out and was laid to rest quite a while ago. This led to a whole other question about just what type of people are so addicted to Living Dead Dolls that they seek out stores like this.

“There is a certain type of clientele who buy the Living Dead Dolls. Most of them are collectors or people buying the dolls for their friends or children.” says Jamie, “One of my repeat customers is from England. They buy a couple of Living Dead Dolls for their daughter every Christmas. It was funny because the mother would say (Picture it in her English accent) My daughter likes “Bloody Dolls” I don’t know why she likes them “Bloody Dolls”. Parents will buy them for their children, but then some of the “normies” buy the dolls as well.”

Just like her clients, Jamie would love to see a Chucky doll made. If you find yourself at the Mystic Crypt tell’em “YBMW sent ya” and please do it in your best Large Marge voice. 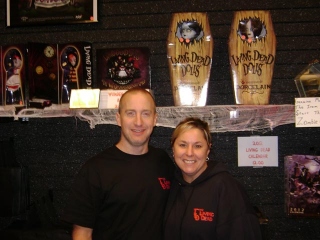 If you find yourself in Oregon and desperately needing a dose of Living Dead Doll heaven then you must certainly checkout The Living Dead. It’s a store all about the reanimation of the dead, in toy form of course. This store is split into two sections, one half zombie merchandise and the other Living Dead Dolls. They have Freddy, Agana, and Spider Bite dolls out of package and in stands near eye level for kids since a large part of their clientele are ten and younger. Ray and Trudi are great folks and haven’t had the shop open for that long. Ray is no stranger to collectible shops since he’s owned a comic shop for twelve years now.

It should be mentioned that you’ll see in those photos a badass monster lab Raymond commissioned from one of his clients. He told me a cool story about what gave him the push to open The Living Dead:

“We had a comic book show in our area so I decided to take the dolls and try them there. Sales were OK, not great, just OK. But, there was this little girl there; she was around 9. She had her favorite stuffed bunny rabbit draped over one arm that had been very loved in it’s life. The stuffing was starting to come out of it. She stopped at our table and asked her dad to get her a doll. He informed her that she did not want one of the dolls and they walked off. About an hour and a half later they came back to our table and the girl explained that she really wanted one. So he let her pick out the doll and bought it for her. SO here is this little girl that is holding her stuffed toy over one arm and a living dead doll in the other and with a great big smile she looks at us and says I think it just needs a lot of love. And she grabs her fathers hand and they walked away. After that I was hooked!”

It’s truly great to see after 13 year these “little dead things that could” are bringing joy to so many people. In a time where the economy is not in the best place it’s good to know stores like these are kicking ass selling cool collectibles and believing in their products.

CP Lorusso is TV / Film / Web writer and editor working in Los Angeles. He plays way too many video games, has never killed a man, broke out of jail once in the 60’s, and owns a dog. He can be reached at CPL[ a t ]YouBentMyWookie.com or on Twitter @CPLorusso.