The Doctor Who Children’s Book Parody: “I Want My Hat Back”

Check out this super cute parody of the best selling children’s book of the same name!

There’s a very popular children’s book called “I Want My Hat Back”. The story tells the tale of a bear who lost his hat and… well, he wants it back. Now The Giant Skeleton has taken it upon himself to bring a little bit of Gallifrey to the story. His version involves the 11th Doctor in a search for his most coolest of hats… his Fez.

On his path he comes across all the people we’ve come to love in the world of the 11th Doctor. There’s Amy and River, Rory and even Craig (sporting a stetson!). We even get a cameo from everyone’s favorite genocidal robot race, the Daleks. 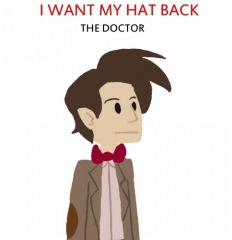