Hines Ward will sport his Gotham City Knights uniform and a repainted one of a kind Dark Knight Rises base.

McFarlane Toys announced recently that they will be releasing a special limited edition Hines Ward SportPicks figure based on his appearance in the upcoming Christopher Nolan Batman film “The Dark Knight Rises.” He will sport his Gotham City Knights uniform and a repainted one of a kind Dark Knight Rises base.

Here’s the official press release:
McFarlane Toys’ is excited to offer piece of the movie in true SportsPicks fashion. During The Dark Knight Rises trailer, fans were able to watch as Bane blew up a football field during a game between the fictional Gotham Rogues and the Rapid City Monuments. Several members of the Pittsburgh Steelers made a cameo appearance during this scene.

The main clip shows retired 2-time Super Bowl champion (Steelers) and last seasons Dancing with the Stars champion, Hines Ward returning a kick for the Rogues. The field begins to collapse behind him as he races for the end zone, engulfing both teammates and would-be tacklers. The scene ends with Ward celebrating before finally turning to see the carnage behind him. The Dark Knight Rises’ Hines Ward figure is depicted in a black and yellow Gotham Rogue jersey created by Under Armour ®, as seen in the film. 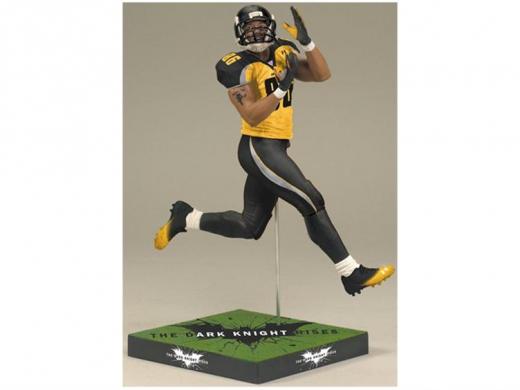