There are six Levels in the program; Bronze, Silver, Gold, Premier, All-Star and MVP. Nearly, every standard figure in a series will now have an alternative figure; either a Collector Level or Classic Chase figure. 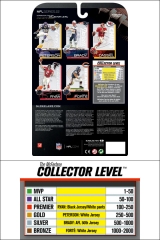 McFarlane Toys announced the start of their new ‘Collector Level’ Program in 2010 for their entire Sportpicks line. Essentially it’s a new program intended to create new limited editions and even more collectible figures that are individually numbered and randomly packed into each sports action figure assortment. From the press:

McFarlane Toys has consistently created highly detailed and sought after collectible sports figures for years. And starting with our new 2010 sports product, McFarlane Toys is adding an exciting new program with the sports collector in mind. Our new Collector Level™ program is intended to give collectors more of what they want; limited edition, highly collectible figures included with each sports action figure assortment.

While any veteran SportsPicks collector will say we have always included “chase” or “variant” versions of existing figures before, the Collector Level™ program is intended to raise the bar.

“We’ve created this new program based on feedback we received from our fans over the years. The primary focus of this program is to create a line of collectibles that will excite you, the hard-core collector,” said Todd McFarlane, McFarlane Toys CEO and self-professed “sports geek”. “On top of this new program, we are also currently in development on new packaging for all upcoming SportsPicks lines: an all clamshell design. Starting with Cooperstown 7, all our 2010 lines will have new clamshell packaging. You ask for it, we will deliver it. We will continue to strive to bring you the best sports action figures possible. Thanks for all your support over the years.”

Here are the things you need to know about the McFarlane Collector Level™.

What’s the Collector Level™ program about?

The Collector Level™ figures are limited in production. Each Collector Level™ figure will vary from the standard figure by having alternate uniforms, base variations, trophies, awards, accessories, possibly authentic player signatures, original or replica sports memorabilia or even pieces of actual uniforms or equipment. Each Level figure will be sequentially numbered on the base, includes the players’ last name and the series name for authenticity. Each Level will have a production range minimum and maximum quantity matched to the specific Collector Level™.

How can Collectors identify the Collector Level™ figures?

– Every SportsPicks assortment case is guaranteed to receive a special Collector Level™ or Classic Chase figure.

– Front labels of the packaging will highlight the Collector Level™ figures available in the series.