The figures are set to hit shelves next March at a cost of $14.99 each. Included in the Season Seven set are: Michonne, Carl Grimes, Gareth, and a Mud Walker.

In just about a month we’ll be returning to a dark train car filled with angry survivors, certain that the people of Terminus have F’d with the wrong people. Until then, we can drool over the new series of Walking Dead figures set to hit the stores from McFarlane Toys. The figures are set to hit shelves next March at a cost of $14.99 each.

Here is the official release and images:

AMC’s The Walking Dead© television series is now the most watched drama in basic cable history! Shattering records along the way with the release of each new season. Season 4 finds Rick Grimes and his fellow survivors continuing to seek refuge in a desolate and post-apocalyptic world and soon discover that there are greater forces to fear than just the walking dead. The struggle to survive has never been so perilous and McFarlane Toys is sitting shotgun for the ride with its seventh series of AMC’s The Walking Dead action figures. Each highly articulated human figure features the likeness of the actor and come with multiple accessories. And each zombie included features an amazing attention to detail and unique play-action for maximum fun!

MICHONNE – ALL NEW
In season 4, Michonne has lowered her guard a bit and formed an unlikely friendship with Rick’s son Carl. Michonne reveals her traumatic past to Carl and the events that lead to her surviving the apocalypse alone. Traveling along the train tracks on the road to Terminus, Michonne enjoys a can of cheese, proving that sometimes even the most deadly warrior needs to enjoy the little things in life. This figure comes with approximately 22 points of articulation, katana sword with sheath, Terminus memorial candle and a can of cheese. 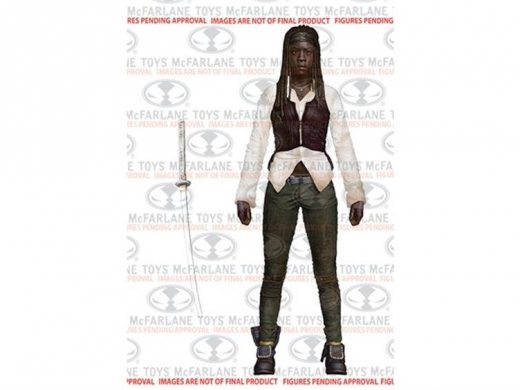 CARL GRIMES – ALL NEW
Carl Grimes, who started out as a shy little boy is season 1, has now become battle hardened by the dramatic events of the most recent seasons. In season 4, Carl’s abilities to protect himself and other survivors have greatly improved. His youth still shows at times, losing one of his shoes during a preventable walker encounter and indulging in a scrumptious can of pudding. This figure comes with approximately 22 points of articulation, removable sheriff’s hat, knife, flashlight, Terminus memorial candle and a can of pudding. 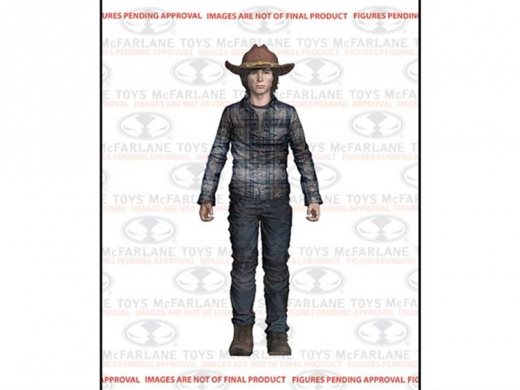 GARETH – DEBUT
Introduced during the season 4 finale, Gareth is the smooth talking leader of the Terminus encampment. Based on the events of that final episode, in which he captures Rick and his group of survivors, Gareth clearly has an alternate agenda to help his people outlive this zombie apocalypse by any means necessary. This figure comes with approximately 22 points of articulation, pistol and Terminus memorial candles. Also included is a rotting human carcass, stripped of its meat and hinting at Gareth’s true intentions for Rick’s Group. 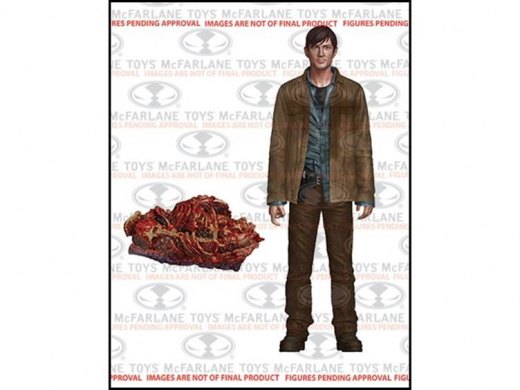 MUD WALKER – DEBUT
The only thing worse than having a walker coming at you is having one sneak up on you…the Mud Walker embodies this most terrifying scenario. During season 4 episode “Too Far Gone,” an unsupervised girl accidently unearths a walker buried in the dirt beside her. The Mud Walker figure exemplifies this gruesome character, complete with decomposing body and a worm coming out of his nose. You can also split this undead figure in half and mount his upper body on his mud-covered base with flash flood sign to recreate this iconic scene. 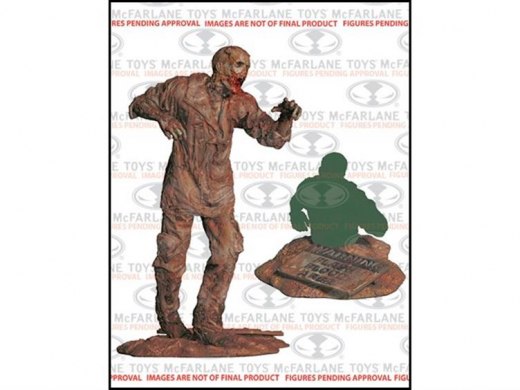