Mezco’s Living Dead Dolls are Turning Lucky 13! Check out this amazing visual history that charts just about every LDD to ever give a little child nightmares!

Be sure to also check out our article about the great people who have created business around the Living Dead Doll Phenomenon! CLICK HERE TO READ 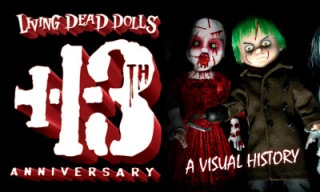 For the most part, when a toy line lasts more than a couple of years, it is because it is attached to a big license like GI Joe, Star Wars or Transformers. It is really rare that a line of collectibles not only endures the test of time, but grows in popularity, reaching a certified… and in some cases certifiable cult status. In past generations you might think I was talking about Barbie, but no… I’m talking about the dolls that might literally eat that blond princess if they were given the chance, Mezco Toy’s Living Dead Dolls.

Unlike Barbie, the physically impossible bimbo of the toy world, the Living Dead Dolls haven’t made their mark by being pretty. In fact, depending on who you ask, they might be considered pretty disgusting… and that is their charm. Baby dolls and fashion dolls are a dime a dozen, but when you’ve got a set of beautifully designed horror dolls that are able to make you but shudder and laugh at the same time, you know you’ve got something special.

Thirteen years ago this year, Ed Long and Damien Glonek started making and selling customized horror dolls. After selling the dolls, which have since become known as “Handmades”, they had a chance encounter at Chiller Con with MEZ, the Founder and Owner of Mezco Toyz, Mez fell in love with the idea, purchased a doll for himself and, shortly thereafter, contracted Ed and Damien to make and distribute what is now known as the Living Dead Dolls through Mezco. The first official Mezco series of Living Dead Dolls hit the shelves in 2001. A decade later, they are more popular than ever and a permanent part of America’s pop culture heritage.

Over the next four weeks we’ll be celebrating the lucky 13th anniversary of The Living Dead Dolls with a series of features and an extremely kick ass contest that we’ll be announcing later this week.

Over the next few weeks you’ll see an interview with the creators of the Living Dead Dolls, an amazing feature on the LDD superfans that have helped these creepy little dolls rise to cult status and even an interview with a store who is devoted entirely to the LDD cause. However, we thought that the best place to begin is a mind-blowing visual history of everything (we could find) that is Living Dead Doll.

Join us as we take a look at all 22 series of Living Dead Dolls along with all the exclusives, minis, barware and everything else that the minds of Ed and Damien have spawned. We’ve got some fun facts about each line (care of Livingdeaddolls.com) and we’ve even selected our favorite poem and cause of death from each series.

*We’d love to share every single poem and death certificate from every single Living Dead Doll ever made, but then you’d be reading this article for the next month. Instead, we went ahead and picked our favorites from each series to give you a taste of the sense of humor that Ed and Damien infused into the LDD line.

Fun Fact: This is the series that started it all. These dolls are still probably some of the most iconic in the whole lines. Even my first Living Dead Doll was a variant mini from this series.

Fun Fact: Series 2 was the first time that a real historical figure appeared in LDD form. Who better to join the Living Dead Doll family than Lizzie Borden. After all, she did take an axe and give her mother 40 whacks…

Fun Fact: Series 3 has the distinction of having the only doll from this series that really comes close to giving me an actual nightmare. That honor goes to Schitzo the clown. I know he was popular, but when I see his evil little face, all I can think is: “Kill it. Kill it with fire.”

Fun Fact: Series 5 is the second time that Damien and Ed ventured into the real world for inspiration on the LDD line. Dahlia is actually based off of Elizabeth Short, the victim of the infamous Hollywood ‘Black Dahlia’ murders. This series also had a decidedly old school Hollywood feel to it across the board that extended beyond the dolls and into the poems and death certificates.