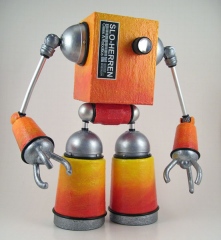 Mike Slobot is an artist with an mild obsession with robots. When people see junk, recyclable materials, and everyday detritus, he sees robots. It’s said that one man’s garbage is another man’s treasure, and for Slobot that certainly is the case.

“The Slobots” are for the most part custom toys/art sculpture created by Slobot. They are regarded as sculptural works of art and fragile despite having some limited articulation. So if you end up getting your grubby little hands on one, you probably don’t want to be playing with in in the bath tub.

Unlike most robots that spit fire, shoot guns, or want to wipe out humanity’s existence, The Slobots are pacifists with recurring theme of “flaws.”

According to Slobots, he thinks it’d just be a lot “cooler to have a robot friend than to be fighting one,” and because “life has plenty of things to fear, so, why not have a friend that encourages hope?”

Not very far into the future, robots existed in many facets of everyday life… As the demand for new technology raced on, many of the earliest robots found themselves without homes or jobs or families. They began to search for new meaning in their lives, in many parts of the galaxy, and even into the farthest reaches of the universe… Welcome to the world of “The Slobots™!!”

To see more of Slobot’s creations and to read a short back story for each Slobots, head on over to www.mheisler.com. Everyone could use a robot friend…