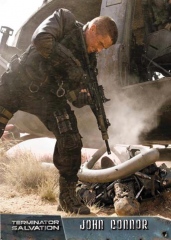 Terminator Salvation represents the re-igniting of a powerful and beloved fan franchise. The original films amassed over $1 billion at the box office; inspired three theme park attractions and a robust merchandising program encompassing toys, video games, comics, trading cards and much more. The new movie is poised to re-engage many pre-existing fans plus attract a new, younger audience to the fold. In anticipation of initial winning results, a trilogy of three all-new Terminator movies is on the drawing boards.

“The Terminator franchise offers all the right ingredients to become an important, ongoing trading card program,” remarks Topps Vice President of Publishing Ira Friedman. Very few properties qualify as a pop-culture icon, with multi-generational appeal and a proven history of merchandising success. This rich and potent brand hits the mark on all counts and represents an enormously exciting opportunity for Topps, our retail partners, dedicated collectors and fans of the films.” The Terminator Salvation trading cards are scheduled to be available for purchase at hobby shops approximately two weeks prior to the movie opening.