MattyCollector has released an update regarding the future of their Masters of the Universe Classics line in addition to early packaged samples of upcoming MOTUC 2012 figures! 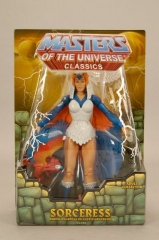 MattyCollector has released an update regarding the future of their Masters of the Universe Classics line. In addition, Matty has also released some early packaged samples of some upcoming MOTUC figures for 2012:

Here’s the release by MattyCollector regarding MOTUC in 2012. Highlights include: smaller run, price differential for subscribers vs non-subscribers ($2-3 more), new mini comics!

Hey He-Fans and She-Ravers, Toy Guru passed me a note on some MOTU updates and I wanted to post it right away:

The 30th aniversairy year starts in less then 30 days and we are just on the edge of our seat. There is so much great MOTU goodness coming next year above and beyond the Classsics toy line in what will surely be a year long celebration.

We’ll be kicking things off in December with a sneak peak at the new licensing art created in the Classics style. You’ll hopefully see a lot of this art on tons of products next year from T-shirts to DVD releases and everything in between.

There are a few projects that have not fully come together, but once all the loose ends are tied, we’ll have some big announcements for fans of MOTU of all ages. Stay tuned.

In terms of the MOTUC toy line, do look for some changes in 2012. For starters, day of prices for basic figures will go up to $22.00. Subscribers will still get there figures for the 2008 price of $20.00. Larger items like beasts and multipacks will also go up in similar increments ($33.00 vs. $30.00 etc…). We are still waiting to confirm implementing a system for subscribers to also purchase day-of or non sub product and save on shipping by combing with their sub items. Please stand by on this.

Also, as previously announced, we are reducing production quota a bit in 2012 to be closer to the sub number. There will be some day-of product, but some figures may not be as plentiful as they were in years past. (which also means you likely won’t see sales like we just had on Black Friday/Cyber Monday again. Sure there may be a sale here and there, but it won’t likely be as extensive or as discounted as we just had). Going forward, as we start planning 2013, the line will start to favor the subscription model just a bit more. After a few years at this, we’ve found that is the safest bet to keep the line going long term. (there will still be day-of, it just means the sub is a bit more important as the lifeblood and growth indicator of the line, if that helps).

Finally, we have had a few schedule slips in 2012 already. There will 100% be a monthy figure, but some of the quarterly or 30th figures may slip a month or two. All will ship in 2012, they just may not be on the orignal month announced at SDCC etc. I know already we moved the Star Sisters to Feb and Thunder Punch He-Man has slipped out to April (from March). He will still have the first mini comic. We will update you as we move forward on any other changes to releases.

It truly looks to be an amazing year to be a MOTU fan in 2012. The mini comics are coming along fantastic. We are likley to reveal the covers of issues 2 and 3 at NYTF at our collector event (along with hopefully the next batch of figures and the updated Snake-Man-At-Arms with Roboto and TrapJaw parts). NYTF Collector night will be out next big reveal for all collector brands.

And the best part; 2012 is just the begining. Great things are in store for MOTU. The next few years are truly going to be a good journey.