Thanks to the Internet at large, new images of Marvel Legends style 6″ Thor and Captain America figures have surfaced.

Thanks to the Internet at large, new images of Marvel Legends style 6″ Thor and Captain America figures have surfaced. These images are official nonofficial Hasbro images, meaning there hasn’t been any official word yet direct from Hasbro, but these images are legit. The figures appear to be Wal Mart exclusives similar to the 6″ Iron Man 2 figures. The figures shown below are as followed:

It’s unsure whether they’d all appear in the same series or split up into two; or if we’ll see any more movie 6″ figures such as a Movie Loki and a Movie Red Skull. We’ll have more information about them once San Diego Comic-Con kicks off beginning July 20th. Stay tuned!!! We’ll know more and have more to share with you then. In the mean time, enjoy these “bootleg” images. 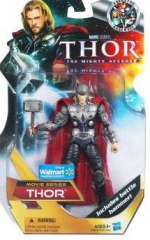 **Update
There will also be a Lord Of Asgard Thor (Comic Series, repaint of Marvel Legends)