The Fourth Doctor and Romana arrive on Skaro and discover that the Daleks are using a group of humanoid slaves and heavy drills to burrow down into the old Kaled city. The Daleks are at war with the robotic Movellan race who have also arrived on Skaro,

determined to find out what the Dalek plan is. It’s soon revealed what the Dalek objective is; Davros their creator! The Movellans insist in joining the Doctor in the race to find him. However on being located by the Doctor, Davros revives, his life support

systems having held him in suspended animation ever since being exterminated by his own creations centuries before. Davros is soon rescued by the Daleks though, and he quickly surmises that the battle computers of the two races are locked in a logical

stalemate, and that he could break it by introducing an element of intuition.

The Movellans, having reached the same conclusion, insist the Doctor to do likewise for them. Knowing this, Davros attempts to destroy the Movellan ship using a suicide squad of Daleks loaded with bombs. The Doctor soon disables the robot Movellans, and

returns to the Kaled City and tricks Davros into detonating the explosives before they reach the ship. The defeated Davros is cryogenically frozen until the freed slave workers can take him to Earth and put on trial for his crimes.

In this great set from Underground Toys we present the Fourth Doctor, Davros and 2 Dalek variants.

Available to ship in mid-May. 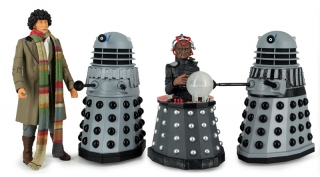 The Time Lords send the Doctor and his companions to the planet Skaro at a point early in its history to stop the development of the Daleks so that they become less of a threat to the Universe. However, Skaro is currently in the grip of a long war of attrition between the Kaleds and the Thals. The Kaleds’ chief scientist, Davros, deformed and crippled by radiation, has been experimenting to discover the final form into which his race will mutate. He has devised a protective travel machine in which they can continue to survive. This is instantly recognised by the Doctor as a Dalek.

Escaping from the bunker where Davros and his Elite are based, the Doctor and Harry persuade the Kaled leaders to put the Dalek experiments on hold. Davros retaliates by conspiring with the Thals to destroy his own people with a rocket. He then activates his Daleks and orders them to wipe out the Thals. Once this is complete the Daleks seize control, killing the remainder of the Elite and ultimately Davros himself. Thal survivors detonate explosives at the entrance to the bunker, sealing the Daleks inside, but for how long?

In this fantastic set from Underground Toys we present Davros and 2 ‘Genesis’ variant Daleks along with the Fourth Doctor in his dufflecoat.

Available to ship in mid-April. 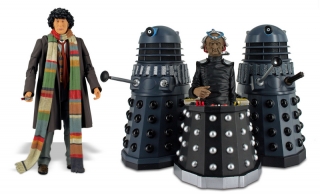