With the new Thundercats cartoon getting ready to either capture the imagination of a whole new generation or bring a tidal wave of angry nerd rage to the hearts of gen x’ers, it is no surprise that the classic characters are popping back up along side the new versions.

As we’ve already reported, Bandai will be doing the full toy line for the new series, but they are also making a classic Thundercats line as well.

Additionally, you’ve Got Mezco, who is making a mega scale Lion-O that already has fans drooling.

The first pics of the Bandai classic Lion-O has just hit the net and we wanted to do a little comparison and see how they look.

Here’s the info we’ve got on the Mezco Lion-O:
– 20 inches tall from the tip of his upraised, extended sword to the soles of his Thunderian boots.
– 7 points of articulation
– Comes complete with his impressive Claw Shield and a removable mystic Sword Of Omens. 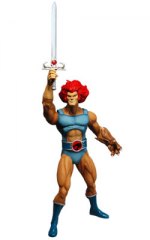 Here’s what we know so far about the Bandai Classics Figure
– 8″ tall (not including sword)
– Seems to have at least 12 points of articulation from the photo.

Personally, I’m leaning a little bit more towards Mezco right now just on the coloring alone. Bandai’s Lion-O looks like he’s been tanning with Snookie. What do you think?