Chernabog is one of the most recognized animated demons in the history of cinema. 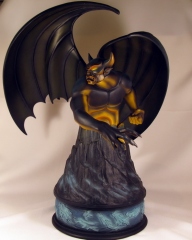 Chernabog is one of those iconic creatures from the Disney Archive. He appears in all of 20 minutes of footage, but the mark that he made in the Night on Bald Mountain vignette of the 1940 classic ‘Fantasia’, but he is probably one of the most recognized animated demons in the history of cinema.

I was really excited to see what Sideshow had done with the character on their Exclusive Chernabog Maquette. Except for a couple bumps in the road, Sideshow put together a really great collectible here.

Sculpt: WOW! I really am impressed with how this guy looks. To give you an idea of how impressed with how he looks… when you enter my home, he’s now the very first thing you see. The were able to capture the look and feel of the character as he appeared in Fantasia perfectly. There’s an animated film vibe to the look that I’ll get into more in a minute, but it almost looks like a 3D drawing instead of just a collectible.

Is there a downside to the piece when it comes to sculpt? In design, absolutely not. In materials? Maybe just a bit. This is me being nitpicky. In a small way, the piece has fallen victim to practicality. This is a big statue. He’s 18 inches tall and another 15 inches wide. He is as big as you’d expect him to be, but that also makes him heavy. He weighs in at around 15 lbs to start out with. So what am I complaining about? There has always been a little bit of a disconnect for me on statues when I can tap part of it and feel that it is hollow. that kind of thing distracts you from the quality of the rest of the piece.

The body of Chernabog is solid, but the base has that hollow ring when you tap it. That said, the sculpting of the mountain base and the fantasia spirits looks stellar. 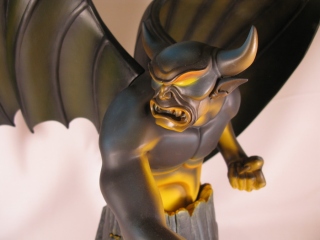 Paint: I mentioned something before about the animated film vibe of the piece. I’ve seen some very pretty Chernabog statues in the past, but this one has something special about it. They used a matte finish which makes the piece look more like animation than like a statue of an animated character. The colors and everything look great.

Lights: One of the nice features of this statue is that they have a cleverly placed LED within the mountain that shines with a fiery orange. I think what I like most about it is that it is subtle. It definitely has a positive impact on the piece. It actually makes it look like he’s rising from a volcano, but they didn’t go overboard just trying to add lights for the sake of it.

Accessories: The Chernabog Maquette comes with a couple of very nice bonuses. First, it comes with an interchangeable head. You can choose between two beautifully sculpted expressions. One is filled with rage and the other is a menacing smile. The heads are simple to replace. They slide right into their hole and stay with the help of a very strong magnet.

The other accessory that comes with the statue is a little demon figurine. He’s a nice little touch to the piece and it showed a lot of respect from Sideshow to the original source material.

In the end, this is a great piece with a couple of minor flaws. Definitely a must for hard core Disney Collectors and a great piece for anyone who likes the darker side of movies. The price might scare some people off at $299.00, but the statue is massive in size and limited to just 200 pieces. Definitely worth every penny.

Check out where it all started: The Night on Bald Mountain Vignette From Disney’s 1941 Fantasia: