They may be free, but they are consistently one of the hottest exclusives at Comic-Con. This year’s bags look better than ever and feature everyone from the Thundercats To Big Bang Theory. 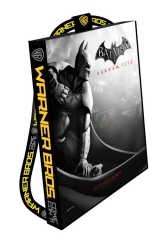 BURBANK, Calif. (July 12, 2011) — The dynamic duo of Warner Bros. Entertainment and Comic-Con have renewed their powerful alliance for 2011, and the Studio will once again serve as sponsor of the Comic-Con International: San Diego Official Bag.

* More than 130,000 of the signature, oversized (24”x28”) bags — dubbed the Con’s “ubiquitous accessory” by Entertainment Weekly — have been produced, and will be available to fans attending Comic-Con upon checking in throughout the five days of the convention, including Preview Night.

* For the first time, the 2011 edition of the bag converts into a backpack, making it as cool as ever — and even more functional! (And, yes, the protective poster tube remains intact.)

Created annually since 2006 by the Warner Bros. Worldwide Television Marketing unit specifically for Comic-Con, the highly sought-after totes provide devoted fans with a handy carrying case for all the merchandise they take away from the Con — and serve as mobile billboards for a selection of the Studio’s key Comic-Con titles.

**Update: We just spoke to a a Fringe Insider who was able to tell us that the reports over at TVline are correct and there will be a special, super limited alternate universe Fringe bag. However, that will be the only variant bag that will be in the mix this year.