The 2012 Convention Exclusive Grimm Fairy Tales Alice Liddle Action Figure is limited to 1,700 figures and will be available for $39.99.

I’ve been a fan of Clayburn Moore for years and his latest Grimm Fairy Tales line has been pretty spectacular. The statues might be a little more than some people can afford, but there’s a great variant action figure on the way for people attending Comic Con (or people who want to pre-order it at www.csmoorestudio.com) 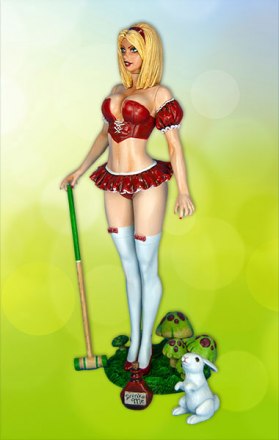 Zenescope’s Wonderland series follows Alice’s grown daughter, Calie Liddle, as she travels back to Wonderland. With stunning art and a new take on the Alice in Wonderland fairy tale, Zenescope’s stories have riveted readers and garnered critical acclaim. Alice is the first in the Grimm Fairy Tales line of action figures based on Zenescope’s popular stable of sexy characters. Additional figures are planned in the line, including Snow White, Queen of Hearts and Sela to commemorate Grimm Fairy Tales #75‘s 2012 release.

Zenescope’s sexy interpretation of this classic character is brought to life by sculptor Clayburn Moore, widely regarded as a master of the female form. Moore is a household name to action figure collectors, who fondly remember his many blockbuster action figure lines over the years for their signature sex appeal and detailed workmanship. The Alice Liddle Action Figure marks Moore’s first action figure release in over eight years, and collectors won’t want to miss adding this beautiful figure to their collections.

Collectors can purchase the figures during the 2012 Comic Con International: San Diego at the CS Moore Studio (#2800) and Zenescope Entertainment (#2301) booths. For preorder information, visit www.csmoorestudio.com and www.zenescope.com.

ABOUT THE CS MOORE STUDIO LTD: The CS Moore Studio Ltd was founded by sculptor Clayburn Moore. With 20 years’ experience in the collectibles business, Moore directs the CS Moore Studio Ltd, which creates licensed statues, busts, and more based on noted comic book and fantasy properties, as well as original creations.

ABOUT ZENESCOPE ENTERTAINMENT: Zenescope Entertainment was founded by Joe Brusha and Ralph Tedesco in 2005 and has quickly grown into one of the top comic book and graphic novel publishing companies in the world. Zenescope’s Grimm Fairy Tales and subsequent spinoff series such as Escape From Wonderland, Neverland and The Piper, which put a dark twist on classic fables, are some of the best-selling and longest running original independent comic books on shelves today. Zenescope’s licensed titles include the ongoing, critically acclaimed Charmed series, based off of the long-running popular television series, as well as Se7en and Final Destination, based off of New Line Cinema’s successful film franchises.