Norman The Dog Who Can Ride A Bike

Big deal, call me when he doesn’t need training wheels!

Norman is a big ole dog with apparently a big ole brain. He’s made a name for himself doing all sorts of tricks on the internet, but none of them are anywhere near as impressive as his newest trick… riding a bike.

Here’s what it says about Norman on his website, normanthescooterdog.com
Norman is a dog whose dream is to be a star on television or in film. He has already appeared on Cartoon Network, The Late Show with David Letterman, Inside Edition and Good Morning America. Currently he can be seen every week on the Animal Planet show “Who Let the Dogs Out?”

About a year ago, Norman gained internet fame for riding a scooter: 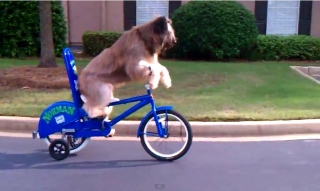