The Street Fighter franchise is the most beloved fighting video game series in the history of gaming. For fans attending San Diego Comic-Con later this month, Udon has prepared some of the coolest exclusives that have ever been offered. They’ve also just opened up Pre-Orders for On-Site pick up, so you won’t have to wait in line, only to find out that the woman dressed as Cammy one space ahead in the line bought the last copy of everything. Check out the full details below:

Street Fighter Legends: Cammy #1 – Convention Exclusive Artist Jam Edition features a brand new wrap around cover not available anywhere else, with art by the 4 main UDON artists Long Vo, Joe Ng, Jeffrey Chamba Cruz, and Edwin Huang. All 4 artists will be available at the show to sign these free of charge!
Limited to 300 copies. 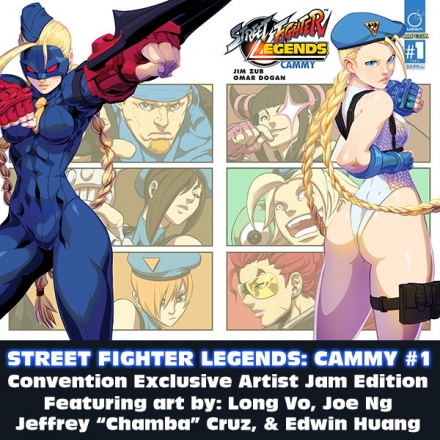 Available exclusively at San Diego Comic-Con 2016, these limited edition collector’s cloisonné pins are made of high quality hard enamel and are sure to please discerning pin collectors everywhere. The set includes 16 regular pins, limited to 375 each, based on the portraits of everyone’s favorite World Warriors as seen on the character selection screen in the Super Street Fighter II Turbo game. The pins come in blind boxes with two random pins per package, and each pin is 1.5” X 1.5” in size. Make sure to be on the lookout for special alternate color chaser variants of each character (limited to only 150 each; incredibly rare!) as well as the SUPER SPECIAL secret character hidden in the mix (1:17 chance)! Collect the whole set and become the ultimate champion! 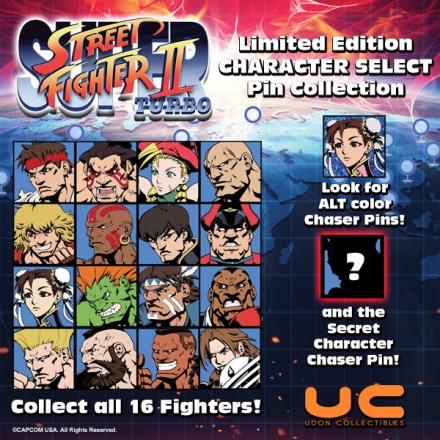 Not to worry, collectors! If sifting through each package isn’t your cup of tea but you still want to own the full 16-character set of the Super Street Fighter II Turbo character select pins, we have another option just for you – but you’ll have to act fast! Strictly limited to 125 units, this handsome framed set features the complete set of mystery pins mounted on a background resembling the character select screen from Super Street Fighter II Turbo. Even better, this framed set also comes with a 3D sculpted logo pin and an airplane pin – both of which are exclusive to this special set! Each framed set comes with a hand-numbered certificate of authenticity signed by both Erik Ko and Long Vo. Finally, this set also comes with a gold Akuma metal card that will not be available anywhere else! One of these elegant framed sets can be yours for $399.99. Don’t miss your chance to be one of the few hard core collectors who owns this super rare item!
EARLY BIRD SPECIAL: Save $50 when you pre-order! Limited 2 framed set per person. 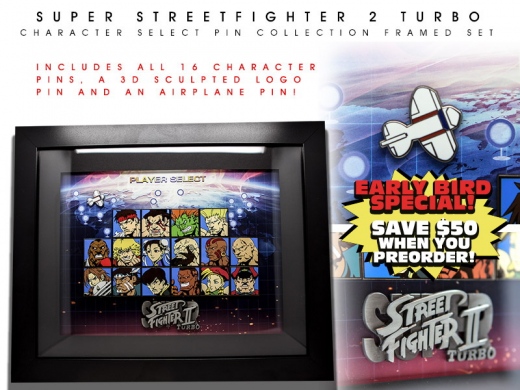 Pre-order now at www.udonexclusives.com before they are gone!
*Must be attendee to Comic-Con 2016 to pick up. See website for details.

Legendary Street Fighter producer, Yoshinori Ono will be signing at the UDON booth #4529 on Saturday, July 23rd from 5-6 pm, at San Diego Comic-Con. And UDON has made a very limited edition set of Premium Layered Print to celebrate this event!

These multi-layered print sets are unlike any other art prints you have seen! Using a top notch multi-pass printing technology on crystal clear 20 pts acrylic sheets, each character is featured on a separate layer allowing you to swap out with characters from different sets. The 4 character layers will be backed by a handsome Street Fighter V logo backdrop that is printed on 10 pts damage resistant synthetic paper! 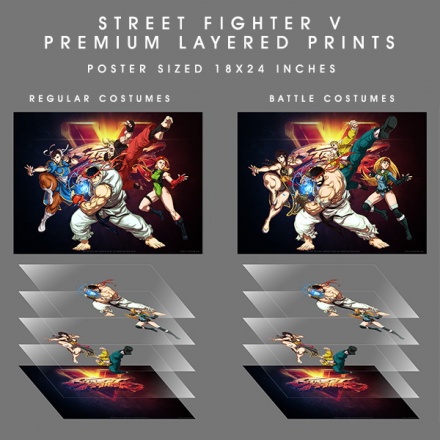 Each set of the 5-layered print measures at 18 X 24 inch size, and comes in a protective top-loader. Two different sets are offered:

Featuring the 4 characters in their alternate costumes! Limited to only 25 sets!!

If you purchase a SFV Premium Layered Print Set from the UDON booth, you can get it signed by the 4 artists, plus Ono-san himself. Not only that – Ono-san will also give you an ULTRA RARE Ono-san gold metal card! 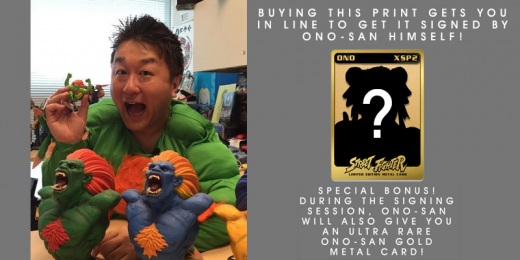 Purchasing this Premium Print gets you a spot in line to get your Print signed by Ono-San himself. And as a special bonus, ONO-San will also give you a free ultra rare Gold Metal Ono-san card!