Your first look at two plushies — based on Scott Pilgrim and Ramona Flowers. 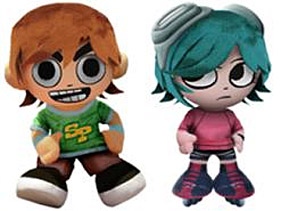 Here’s your first look at some upcoming merchandise for Bryan Lee O’Malley’s hit indie comic book series “Scott Pilgrim.” With the movie dropping soon (August 13) and the final volume set to debut, it’s only natural that we begin to see merchandise being developed for it to cash in on the hype.

Last year we wondered whether the concept was “action figure-able” and it seems as if it is not quite there yet. However, merchandise based on the comic likeness is and thanks to O’Malley we now have our first look at two plushies featuring the likeness of Scott Pilgrim and Ramona Flowers.

The image is from Canadian comic book shop Strange Adventures. According to the shop’s Twitter feed, the plushies will be available in late July, and are being manufactured by Mezco Toys.

This makes perfect sense, because while the comic Scott Pilgrim is very unique and likeable, no one in their right mind would ever want an ordinary (because that’s what it is) Cera doll/figure. If marketing was smart, they’d concentrate on moving trade volumes and Scott Pilgrim trinkets related to the comic rather than the film. It’s bad enough that Cera’s been unleashed upon the world, but what Scott Pilgrim fan would ever want to bring “Cera” into their home. Not this fan, I tell you!

Mezco Toyz creates 8inch plush figures of Scott Pilgrim and Ramona Flowers, based on the characters from the upcoming Universal Studios movie “Scott Pilgrim vs. the World”, due August 2010.

Meet charming and jobless Scott Pilgrim (Michael Cera); a bass guitarist for garage band Sex Bob-omb. The 22-year-old has just met the girl of his dreams…literally. The only catch to winning Ramona Flowers (Mary Elizabeth Winstead)? Her seven evil exes are coming to kill him. Genre-smashing filmmaker Edgar Wright (“Hot Fuzz”, “Shaun of the Dead”) tells the amazing story of one romantic slacker’s quest to power up with love in Scott Pilgrim vs. the World.

Scott wears his jeans and trademark SP shirt, while Ramona sports her famous skates and her goggles.

Available at finer retailers in July 2010, or pre-order at: Mezco Toyz 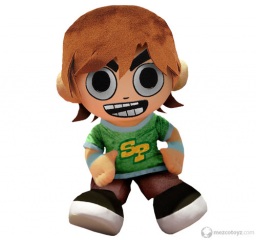 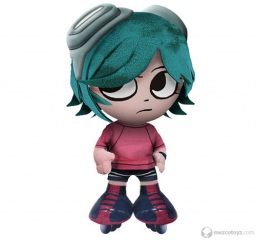